It was March 7 2015. I got off the indoor trainer and checked Twitter to look for race results; I was feeling pretty miserable, writes Sharon Laws.

It was the first ever women’s Strade Bianche. I should have been racing. Instead I was recovering from a broken collarbone sustained in  Tour of Qatar. If there was one race in the whole of the UCI calendar I wanted to do it was Strade Bianche. I never got the chance. A mixture of tough climbs and gravel roads, it appealed to my mountain bike background. The previous year I had ridden the ‘Hell of the High Country, Boone Roubaix’ in North Carolina – an 80km race with 20km of dirt roads. It was one of the hardest, but most fun, days I’d had on a bike.

History of the race

Strade Bianche literally means ‘white roads’ in Italian. It refers to the network of limestone, gravel roads that run amongst the vineyards and olive groves connecting the tiny paese (hill top villages) of the beautiful Tuscan countryside in Italy. The race starts and finishes in Siena, a UNESCO World Heritage site, surrounded by ancient walls, which once protected the city. The first edition of the men’s race was held in 2007 and evolved from the Eroica Strade Bianche (‘heroic race of the gravel roads’) – an annual sportive in which all participants ride bicycles built before 1982 and wear vintage clothing and accessories. This year the men’s UCI race, like the women’s, will be part of the UCI World Tour. Fabian Cancellara has won the event three times and, in recognition of this achievement, a gravel road sector has been named after him.

What is so special about this race?

In addition to its iconic location, this race is unlike any other on the calendar. The mixture of gravel and paved roads adds a completely different dimension. It is unpredictable: nervous riders, punctures, crashes, loose gravel and dust are all guaranteed. The climbs are not long, but hard and steep, so favour the punchy, classic riders and those with good bike handling skills.

Most riders are likely to opt for 28mm tyres (as opposed to the usual 23mm or 25mm) running a lower tyre pressure to give more grip on the gravel roads. With gradients reaching almost 20% in places, riders are also likely to select gear ratios according. This is very much a personal choice; a 52:36 chain ring combination is popular for this kind of race or, if running the more traditional 53:39, an 11/28 would be the best option on the back. Some riders may opt for a compact chain ring combination of 50:34.

The 2017 Strade Bianche edition is 127km with 30.5km of gravel roads in eight sectors (see map and profile below). The hardest part of the course is arguably in the final hour, which is relentless; continually up and down with climbs and descents in double digit percentages and no chance for recovery. 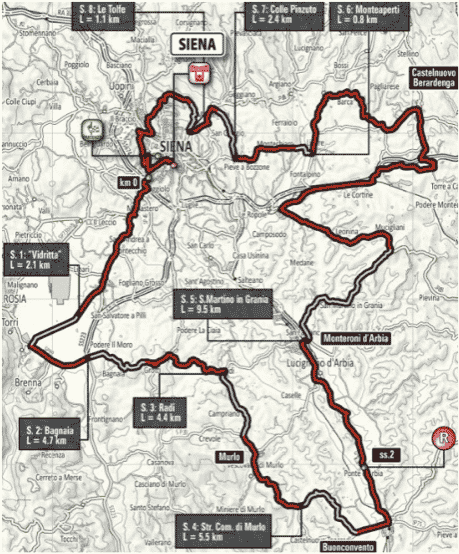 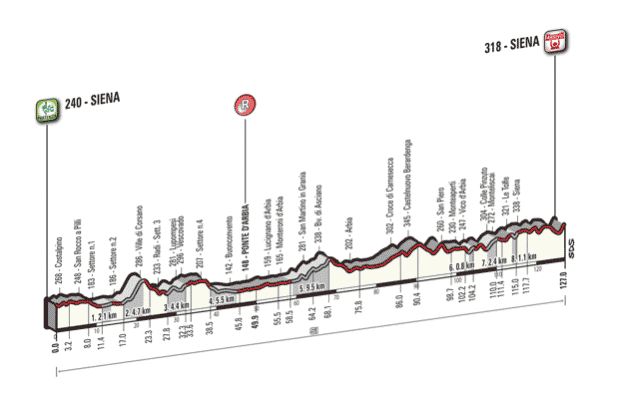 The final challenge to the finish in Piazza del Campo is Via Santa Caterina, only 300m long but with an average of 18%. This is where Lizzie Deignan (nee Armitstead) attacked her breakaway companions in 2016 to take the win.

Like all races it is critical to be near the front at the crucial moments, but in Strade Bianche this is even more important. If someone brakes in front or takes a bad line, riders behind may be forced into the loose gravel at the edges or in the middle of the road on the unpaved sectors, where the risk of crashing or puncturing is high. We can expect to see riders racing for position before the gravel sectors and critical climbs. The course itself is selective and it is likely that we will only see a small, elite group by the end of the gravel road sectors.

The inaugural Strade Bianche, 2015, was 103km with 17km of gravel. The longest gravel sector split the bunch to pieces and only 14 riders were left in contention by the mid point of the race. The selective nature of the course and continual attacks reduced this to 5 riders. Boels Dolmans had the numbers and, with just over 20km to go, Deignan attacked. When she was brought back, her teammate, Megan Guarnier counter attacked, staying away to take a solo win. Deignan made it a 1-2 for the team, beating Elisa Longo Borghini in the sprint.

In 2016 the race increased to 121km with 22km of gravel. The 5.7km Merlo climb, at around 30km, split the peloton but a much larger group of 35 riders remained. Despite some individuals and small groups escaping, these riders were back together by the time they hit the final gravel road sector. Kasia Niewieadoma attacked and  Deignan and Emma Johansson went with her. These three stayed away and Deignan left her companions behind on the steep climb into the Piazza del Campo.

Vos named Strade Bianche as one of the races she was most looking forward to and, with her cyclo-cross background and abilities on steep climbs, she is my top pick for 2017. Teammate Niewiadoma was second last year and could also be in contention for a podium place. I can see these two working together in much the same way as Guarnier and Deignan in 2015. Watch for the attacks and counter attacks with this pair. 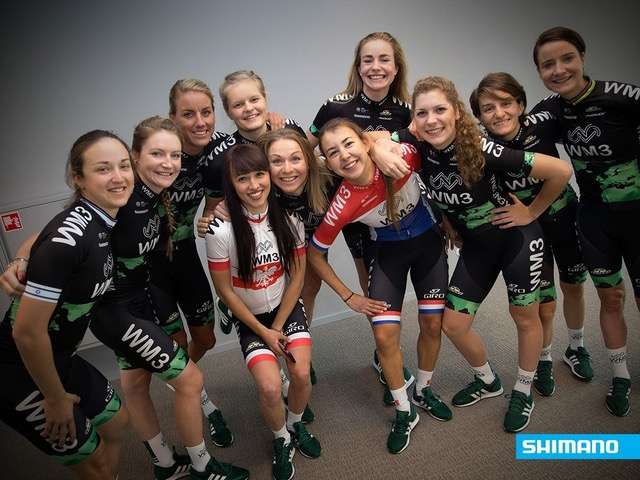 If the two former winners, Deignan and Guarnier, weren’t enough to contend with on one team Boels Dolmans added Olympic and European Champion, van der Breggen, to their firepower this year. Any of these three could win the race and I expect at least one or more to be in the final select group. Only Guarnier has raced so far this season (finishing 21st in Omloop Het Nieuwsblad and a DNF at Omloop van het Hageland), so Deignan and van der Breggan’s form is, as yet, unknown. 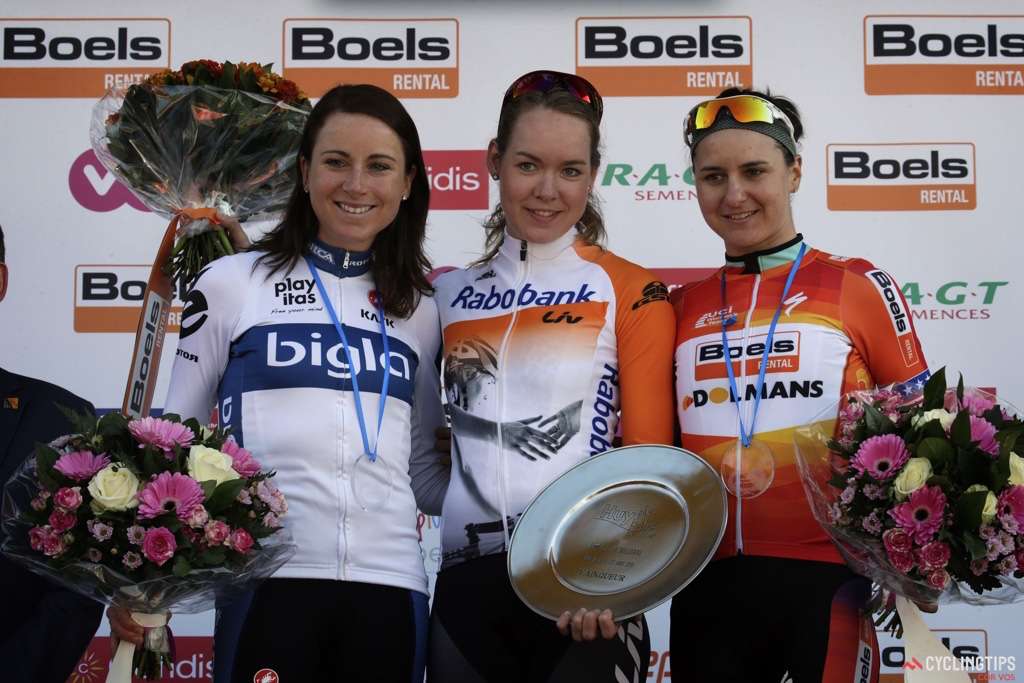 Longo Borghini finished third in Strade Bianche in 2015. As an Italian, this is a very important race for her. She has demonstrated she is in great form for the Classics finishing fifth in Nieuwsbland (having been in a break with Ellen van Dijk for a good proportion of the race) and only being caught in the final kilometers of Hageland last weekend. I think there is a good chance we will see her on the podium this year.

Brand is flying after her first cyclo-cross season (she finished fourth at the World Championships) and she won the first European road race, Nieuswsblad, last weekend. An excellent bike handler and strong on the short, steep climbs I expect her to be in the mix this year. Like Brand, Rivera can handle a bike and she is my ‘outside’ pick.  Brand and Rivera will have a strong team behind them, particularly with the support of Ellen van Dijk, who is likely to play a critical role in shaping the race.

Both van Vleuten and Spratt started their season early and successfully in Australia with van Vleuten winning the Cadel Evans Great Ocean Road Race and Spratt the Santos Women’s Tour. They both rode aggressively in Nieuwsblad finishing 3rd and 6th respectively. I’m expecting a strong showing from both of them and a good chance of a podium place for van Vleuten.

With the high chance of crashing or puncturing in Strade Bianche any potential winner does, however, also need a lot of luck on her side. One thing for certain is that we will have a great opening race for the Women’s World Tour of 2017.