Voxwomen are very excited to announce we are heading out to South Africa in just under two weeks time to once again partner with the Telkom 947 Cycle Challenge.

In its second year as a UCI 1.1 race, the first of its kind in Africa, Telkom 947 is a race that continues to grow. Last year former South African champion Ashleigh Moolman Pasio of Cervelo Bigla Pro Cycling overcome a heavy crash and severe mechanical problems to win from a solo breakaway ahead of the Liv Plantur duo Sabrina Stultiens and Floortjie Mackaij, and Voxwomen were there to capture all the action.

This edition, Moolman Pasio will not be able to defend her title, after a collision with a moto in the Chonro des Nations time-trial saw her out for three months with a broken hip. While she recovers, Cervelo Bigla will look to climb to the top of podium once again.  There will be fierce competition from the likes of Team Tibco-Silicon Bank, Hitec Products and Bizkaia Durango, as well as local stars from African teams including the newly formed Africa Rising.

Race director Jenni Green said: “This year, the Cycle Challenge celebrates its 20th year and what a milestone it is! As the event owners, 947 has watched the event grow and change, and like proud parents, we are thrilled at what the Cycle Challenge has become. Each year we strive to better the last – and we think the 20th edition is going to be the best yet.

“This year, the event has a new title sponsor, Telkom, a telecommunications powerhouse who prides itself on speed and connecting people. For our women’s racers, speed is the name of the game on the day, and we’re delighted that thanks to our UCI 1.1 ranking, we can once again connect female racers from South Africa, the rest of Africa, and the world, through the Cycle Challenge.

“For most of the nearly 30 000 riders, the Cycle Challenge is about participating and finishing. You may see many riders in bold outfits and costumes as they tackle the course to “Ride for a Purpose”, to support a cause or charity that may be meaningful to them. To date, through the Ride for a Purpose initiative, the Cycle Challenge has managed to help raise R50 million in just 5 years. It’s just another way that 947 and the people of Joburg express our “all or nothing” attitude.”

Voxwomen will bring you a race report, top tips and feature-length interviews for both our YouTube channel and the Voxwomen Cycling TV Show, as well as capturing all the behind-the-scenes action. 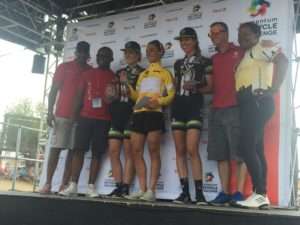