The Vox Kitchen opens its doors once again and seasoned chef and baker Hayley Simmonds, two times British time trial champion is in, rustling up some treats for us! This is the first of two recipes from the Commonwealth bronze medallist. Don’t forget, if you give this a go, make sure you tag us and Hayley Simmonds in your photos on social media. @voxwomen / @hayleyrsimmonds. Here’s Hayley…

“At the moment a lot of people are enjoying a bit of baking and I think sweet treats are needed a bit more frequently than normal for a bit of a boost. In the UK though it’s actually been quite difficult to get some basic ingredients that are normally really plentiful.  The recipe below is pretty quick and easy, don’t require many ingredients and can be enjoyed separately, or together. You don’t need any flour which is a massive plus because that’s one thing that is still quite difficult to find in supermarkets.  The chocolate mousse is relatively healthy too…”

Simple and healthy-ish chocolate mousse
85g dark chocolate (good quality)
1 tablespoon cocoa powder
1/2 teaspoon coffee granules
1/2 teaspoon vanilla extract
2 egg whites
1 tablespoon golden caster sugar (you could substitute normal caster sugar or even light brown soft sugar if you don’t have golden caster)
50g Greek yoghurt (thick – don’t use the thin Greek-style)
1. Chop the chocolate and put in a bowl. Mix the cocoa, vanilla and coffee with 2 tablespoons of cold water and pour this over the chopped chocolate. Place the bowl over a saucepan of simmering water to melt (don’t let the bottom of the bowl touch the surface of the water). Once just melted remove from the heat (the melted chocolate should still be quite thick).
2. Stir two tablespoons of boiling water into the melted chocolate to thin it down – it should become silky and smooth. Leave to cool slightly.
3. Whisk egg whites to fairly soft peaks, add the sugar and then whisk until thick and glossy. Beat the Greek yoghurt into the cooled chocolate and then fold about 1/3 of the egg whites into the mix using a large metal spoon (this should minimise the amount of air that gets knocked out). Once incorporated, gently fold in the rest of the egg whites until evenly mixed in.
4. Spoon into four cups/glasses and chill for a few hours or overnight.
5. I serve with a spoon of vanilla yoghurt. Enjoy! 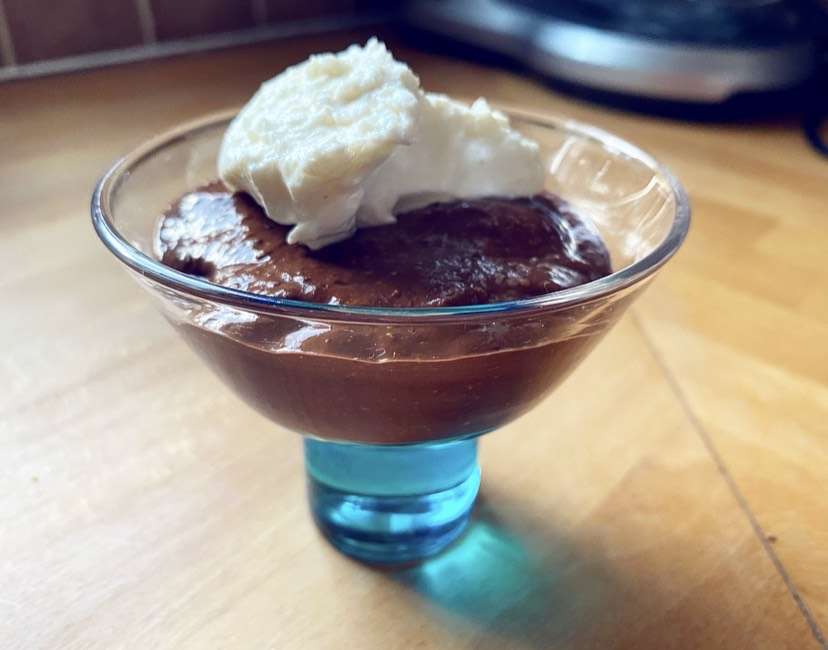