If you want to read a Giro racereport, move on. This blog won’t tell you who won the race or how. Consider it more like my personal Girodiary. One fact per day to remember my first finished Giro. I’m Christine Majerus and here’s my 10 day diary.

Dear Diary. Here I am again pinning numbers. Most riders have favourite race numbers. Mine’s for example 14, because that was my number when we became TTT World Champion. Racing number 1 commonly means you are the defending champion, so you can imagine my shock when our team director handed me number 1. I was ready to refuse racing with it. I was even thinking of wearing a vest the whole Giro to hide the number, but obviously due to the high temperatures that would have been suicide. You should wear number 1 with pride because you won the race before and not with shame because you know it will look terrible being dropped with that holy number. I mean I will have no choice but to race with it (someone needed to, with Anna not racing) but I decided to submit a new rule to the UCI : Number 1 should not be distributed if the defending champion isn’t taking part in the event. 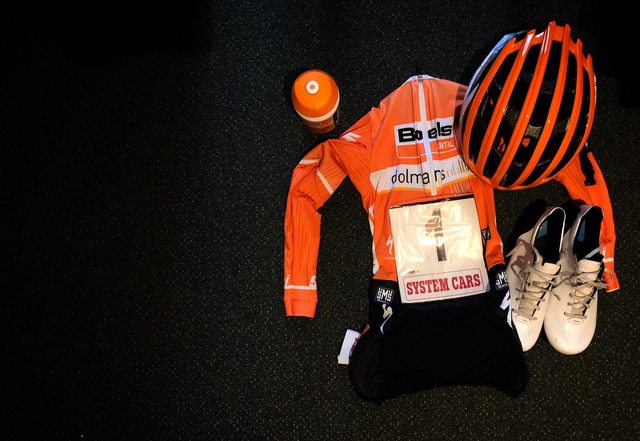 Dear Diary. You probably know that Italy is affected by global warming. Today wasn’t any different. In men cycling, grabbing a musette that contains several bottles, gels and a fresh coke, is something you see all the time. But musettes in women’s cycling is something I personally haven’t seen that often yet. Normally our races are having a reasonable length (and I hope it stays like that) so even when it has high temperatures we don’t need to work with musettes. Until today I have never grabbed one. You can imagine my surprise when arriving at the first feeding zone  I saw Smiley (our soigneur) with a whole bunch of musettes waiting for us. My exact thoughts were : Just do like they do on TV. I didn’t crash, got all my bottles and enjoyed the cold Coke. By the end of the day I even grabbed 3 together as my teammates missed theirs. I can add that quality to my CV now.

Dear Diary. I don’t know what you are doing during your holiday but a lot of people follow races like the Tour de France with their camper. They show off their flags with pride and paint riders name on the road. Apart from my parents I think no one ever travelled hundreds of kilometers only to see me racing. But it happened during this Giro. I have been noticing a camper with Luxembourgish number plate and flag during yesterday’s and today’s stage. It was a nice feeling. Unfortunately I never saw the person belonging to the camper. But that’s where social media maybe does the trick. I did a twitter call-up to find the owner. Hopefully it will work. (PS it worked!) 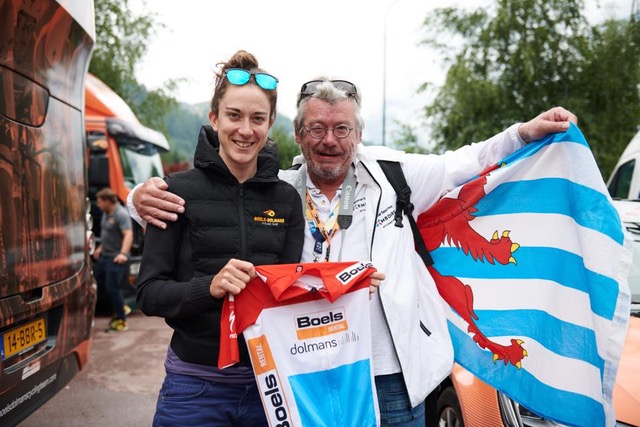 Dear Diary. Do you remember 2 years ago when I crashed really hard during this race. That’s also the reason why I don’t want to sprint in this year’s Giro. Today could have been once again one of those crashing days. In the final I saw the 3km sign literally on the other side of the street and I was asking myself if I read the roadbook wrong and if there was still a U-turn showing up. No, they just misguided us in a roundabout and now we were literally on the wrong road. Still don’t know how I made it in one piece back to the race road. Unfortunately not everyone did… Safety first.

Dear Diary. I am sorry, I complain again about the heat. It did dry out my eyes today. After spending 80km in the break-away I lost my left contact lense because of the heat. Unfortunately it just happened when the bunch caught us back and I had a hard time feeling safe in the peloton. Everything on my left was blurry and fighting for your position half blind is not a nice thing to do. I was happy to see (kind of) the finish line that day, not so happy with the headache I have been having since.

Dear Diary. Today my teammate tried to « sabotage »  my bike. We try to cool down by using icepacks on our necks. They are usually made with stockings filled with ice. The ice is melting during the race and after a while only the stocking is left in your neck. They are kind of annoying in your neck so from time to time we throw them away. Chantal rode in front of me, throw her stocking away and it ended… in my derailleur. Everything was blocked, I had to stop and even the mechanic had a hard time getting it out again. Whilst coming back I picked up some bottles at the car. I gave bottles to everyone except to Chantal. She also didn’t dare ask.

PS. Yes we are friends again.

Dear Diary. Today was TT day. No not Timetrial. Only the first 20 did timetrial for real. For everyone else it was just a TunnelTime day. Because someone said the view at the top was beautiful and the blue of the lake was amazing, the whole bunch decided to ride up a dead-end climb to check if it was true. It was. But what they didn’t tell us was that we should have put lights on our bike because there were at least 8 tunnels to go through. They added some lights but unfortunately took them away straight after the last rider. Maybe they thought we would all go down again by helicopter and wouldn’t need the lights anymore? Arriving with speed in a tunnel were you are expecting lights but there aren’t, isn’t fun anymore.  Safety first (again).

Dear Diary. You know food is important to me. When I tried to find good reasons to do the Giro this year, food was one of the main reasons. You would never expect to have bad food in Italy. I mean in the country of Pasta, Pizza and Risotto nothing could go wrong at least food wise. I was wrong. We spent the first few days in rather big hotels, sharing dinner and breakfast with other teams so it was mostly buffet. I won’t try to make it sound nice but the food was really not good. But today we are finally staying in a smaller hotel. The rooms are not fancy, the beds are tiny and the decoration hasn’t been changed since the opening of the hotel, but the food was delicious. I only missed the tiramisu to make the day count.

Dear Diary. Today was the day everyone (except one) was afraid of. The rumors were true. The Zoncolan is terrible. I did it and no one can ever ask me again to do a climb like this. Today I literally gave up every self-esteem I had. I first tried to do it in style. But seriously, I quickly gave up. I ended up doing the Zig-Zag style from bottom till nearly top. I am not proud of it and you shouldn’t neither, but my legs thanked me for the 3 rpm more legspeed it provided. I mean I was prepared to go slow (see below) but not that slow! 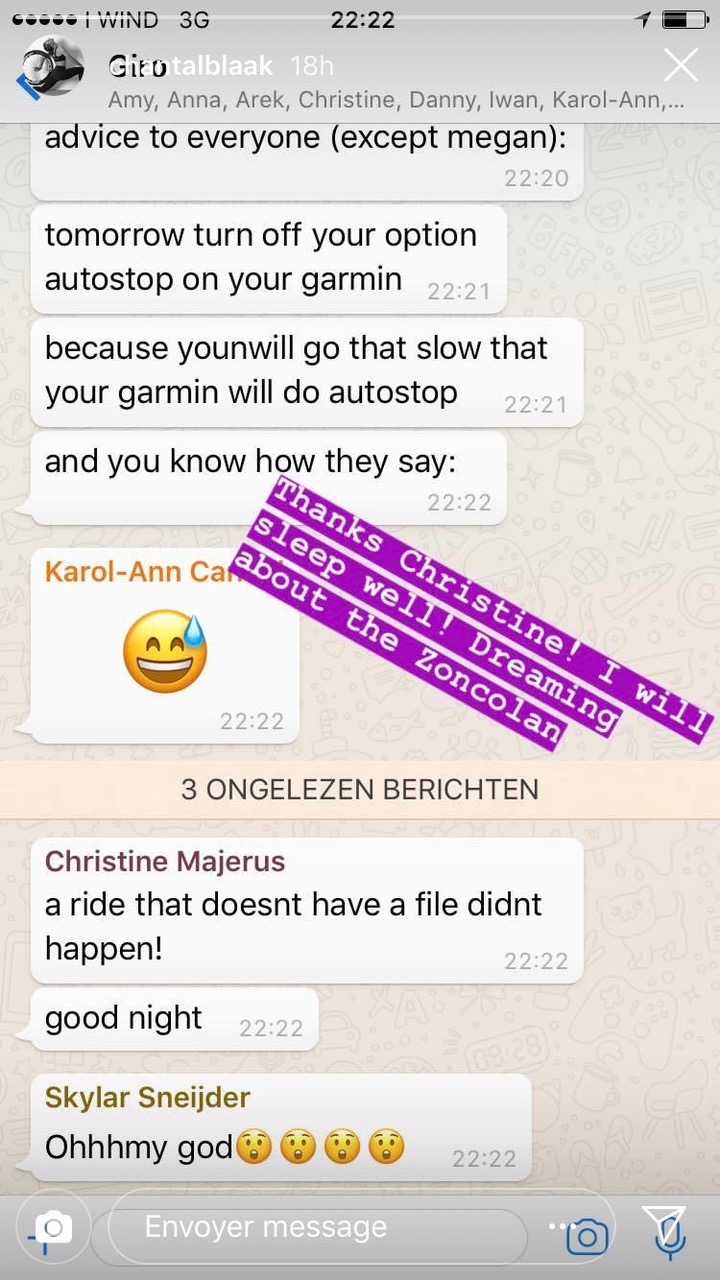 Dear Diary. Final day ! So there needs to be a winner. As I said beforehand this isn’t about the race so I am looking for a different kind of winner. I made a little selection of the best hotel art I have seen over the last few days. I can forward you the list of the hotels in case you want to do an offer for one of them. As for myself I won’t. I am happy I can go home, enjoy my own food, my own bed, my own art & lower temperatures. Ciao bella Italia.