As the stage racers breathe a big sigh of relief and many of the Spring racing specialists take a short break, we can celebrate the closing of an amazing Classics season. This year the Women’s World Tour (WT) was strengthened by the inclusion of the Amstel Gold Race and Liège–Bastogne–Liège and combined with Flèche Wallonne, we had an incredible ‘Ardennes week’.

Sharing out the wins

Until the Ardennes week Boels Dolmans didn’t replicate their 2016 domination. World Champion, Amalie Dideriksen, taking their only win at Ronde van Drenthe. Although this was partially due to sickness and injuries of key Boels riders in the early classics, the reshuffling of riders to new teams for 2017 has led to a more even distribution of strength – making the racing much more exciting. Until Ronde van Vlanderen (2nd April) a different rider and team had won each of the WT Races. Only Lotta Lepistö (Cervélo-Bigla) had won two Classics (Gent Welgevem/WT, and Dwars door Vlaanderen/UCI 1.1). This all changed at Ronde van Vlanderen when Coryn Rivera (Team Sunweb) backed up her Trofeo Alfredo Binda win. A day later at Dottignes (UCI 1.2) Jolien d’Hoore (Wiggle High5) backed up her win at Omloop van het Hageland (UCI 1.1). Not to be outdone Boels Dolmans took the WT Ardennes week by storm with Anna van der Breggen taking three phenomenal wins and her teammate, Lizzie Deignan, taking second and Kasia Niewiadoma (WM3 Pro Cycling) third, in all three races.

In a thrilling finale Elisa Long Borghini (Wiggle High5) had an emotional win on home soil at Strade Bianche, the opening round of the 2017 Women’s World Tour. This put her in the WT jersey, which she held for another four races, losing it to Rivera who won Ronde van Vlanderen. Rivera wore the jersey for Amstel Gold and Flèche Wallonne but opted to sit out Liège–Bastogne–Liège. Annemiek van Vleuten’s (Orica Scott) fifth place in this final WT classic moved her into the leader’s jersey – 40 points ahead of Niewiadoma. Van Vleuten’s consistency throughout the Classics has been impressive. In the opening race of the Spring, Omloop het Nieuwsblad, she was third. She went on to finish in the top 6 in all the WT races with the exception of Gent Welgevem. Her only WT podium was, however, at Amstel Gold, where she awarded equal third with Niewiadoma – even a photographic finish couldn’t separate the two!

As one of those riders who was relieved when the Spring Classics were over I asked retired athletes, double Olympic Medalist Emma Johansson and Olympian Vera Koedooder, both Spring season specialists, for their thoughts about the last few months racing.

Emma loves the ‘new look’ with the additional races and increased distances. She said: ‘Part of me sort of wished I got to race them… I’m happy Paris Roubaix is not a race for us yet; then I would have had to make a comeback! There has been some very aggressive racing and I think it is very good for the female peloton to show that our races are just as spectacular as the men’s.’

Vera agrees: ‘I think the new Classics Season will bring women’s cycling to another level – it is already a big step ahead, hopefully more to come (maybe a Paris Roubaix!). I’ve heard from some riders that the atmosphere was really amazing (at Amstel Gold) and especially the team presentation together with the men. The live coverage on TV was great too.’

Both Emma and Vera agreed that the stand out performance of the Spring was by Coryn Rivera (Team Sunweb). Emma said ‘she is so much more all around than I thought. The whole team has actually done amazing, how strong they race and the way they support each other!’

Vera echoes this saying ‘she was a fast sprinter already but to win those tough races was beyond expectations. She had a strong team too with especially Ellen van Dijk and Lucinda Brand who played a big role in her win too’.

Many people were surprised that Rivera didn’t race Liège–Bastogne–Liège but she told me ahead of the race: ‘I have certain goals this year and continually holding the women’s world tour leaders jersey isn’t one of them. By focusing on the races that suit me, I might have a better chance to get the jersey back than to race everything because I’m in the jersey and be burned out by the end of the season. It’s been an amazing 2 races in the leaders jersey and I will cherish the memories. With good planning and racing well at my target races, I hope to get the leaders jersey back along the way.’

Vera also highlighted: ‘The triple for Van der Breggen, Deignan and Kiewiadoma with their exceptional 1st, 2nd and 3rd places in the Ardenne classics’.

Kasia Niewiadoma deserves a special mention. Out numbered 2:1 to Boels Dolmans teammates Van der Breggen and Deignan in the Ardennes week she still maintained her aggressive style of racing and charming post race interviews. Like Deignan, she also finished on the podium at Strade Bianche – both these riders having the highest number of WT podiums this year. Van der Breggen had 3 WT podiums and also finished 2nd at the Healthy Aging Tour.

Personally, I also think Ellen van Dijk (Team Sunweb) has had an incredible start to the year. She has been so strong and instrumental to Rivera’s victories. It was great to see her have a share of the limelight taking the overall win at the Healthy Aging Tour for the 3rd time in her career.

Rivera won the ‘surprise performance’ prize for both Emma and Vera. Emma also commentating on Van der Breggen’s three straight wins, which she thought might have been shared within the team. Vera also highlighted Cecilie Uttrup Ludwig, Cervélo Bigla, leader in the young rider classification of the WT. ‘She is definitely a big upcoming star!’ Ludwig has a commanding lead in the young rider classification, although she has taken part in the highest number of races.

I have additionally been impressed with Shara Gillow (FDJ Nouvelle Aquitaine Futuroscope), finishing 5th, 6th and 7th in Flèche Wallone, Strade Bianche, and Liège–Bastogne–Liège respectively. Previously a hard working domestique it has been good to see her have the opportunity as one of the leaders for her new team. I expect we will see more from her as we move into the stage race season.

Lotta Lepistö (Cervélo-Bigla) won Gent Welgevem in an impressive sprint against D’Hoore and Rivera. Given that she finished 3rd at the World Championships in Qatar last year, her success was not a surprise but it was her first WT win. Arlenis Sierra (Astana) and Gracie Elvin (Orica Scott) had the best performances of their career finishing 2nd at Trofeo Alfredo Binda and Ronde van Vlanderen respectively.

Both Emma and Vera thought Ronde van Vlanderen was the best race of the Classics. Emma was at Vlanderen and said: ‘To be there live always make it more interesting. It is still my favourite’.

Vera explained: ‘It was very exciting until the very end. After a very entertaining and active race, the strong breakaway got caught in the last km, followed by an exciting sprint with a close finish for the podium contenders’.

Overall Emma said she thinks: ‘The strength of the teams are more equal this year and therefore it’s been more interesting to follow the races. Last year Boels were outstanding and that made the races a bit boring in my opinion’ Vera supports this view saying ‘the races were absolutely not boring and very exciting from start to finish! I think the trend towards more aggressive racing has been going on for the last eight years. As I was always a very aggressive rider, I love to see this. There are more strong teams besides Boels-Dolmans this season and the best riders are divided between all the top-teams’. Currently Boels Dolmans lead the WT team classification with 1239 points to Sunweb (733 points) followed by Orica Scott (714).

Thank you to Emma Johansson and Vera Koedooder for taking the time to contribute to this review.

Sharon worked for over 10 years as a conservation advisor for a range or organisations before becoming a professional bike rider. She is a former road, time trial and mountain bike marathon National champion and World Champion bronze medalist in the team time trial. Sharon represented Great Britain on the road at five World Championships, the 2008 Beijing Olympic Games and the 2010 Delhi Commonwealth Games and, on the mountain bike, at the European Championships. Sharon retired in 2017 and is currently undergoing intensive treatment for cancer. (Photo credit: C M Muller) 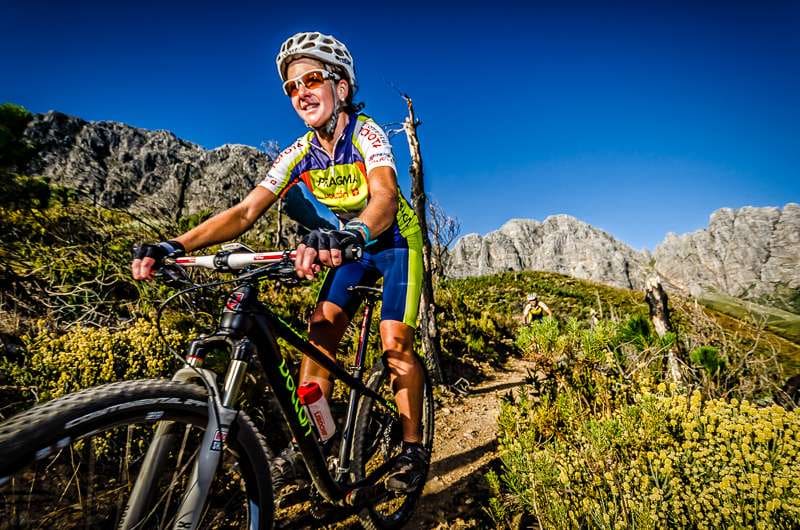