Reminding myself of the bigger picture

After some nice winter training in the UK, and I’m not being sarcastic; the weather was actually rather mild so I wasn’t having to go out training with numb fingers and toes! I set off to Gran Canaria for a training camp with my 2 teammates, Cille and Lizzy, as well as Annika Langvad. I have a photo of myself and Annika from the MTB World Championships in Czech Republic, where I came 4th Junior and Annika won the Elite title! So sharing an apartment and training with her was so cool, as she’s a rider who I’ve looked up to and have lots of respect for. 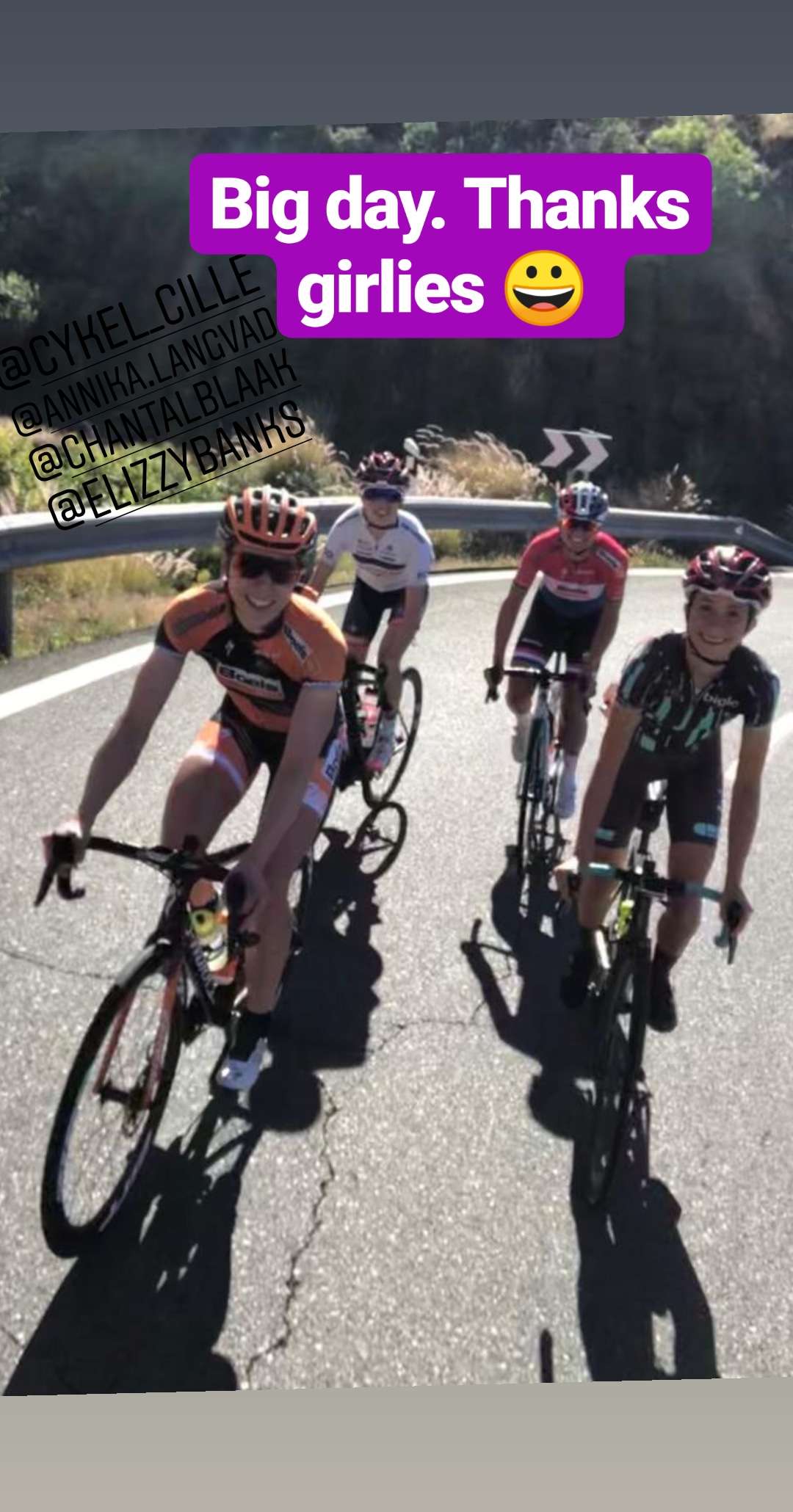 We all got along really well together, and took it in turns to cook dinner most evenings. Most of our rides were together, but we just incorporated our own individual training efforts where and when. On one of the days we did an epic 6hour ride with over 14000ft of elevation! Chantal Blaak-one of Annika’s teammates-joined us for this ride which again was great to be riding in the company of 2 World Champions! 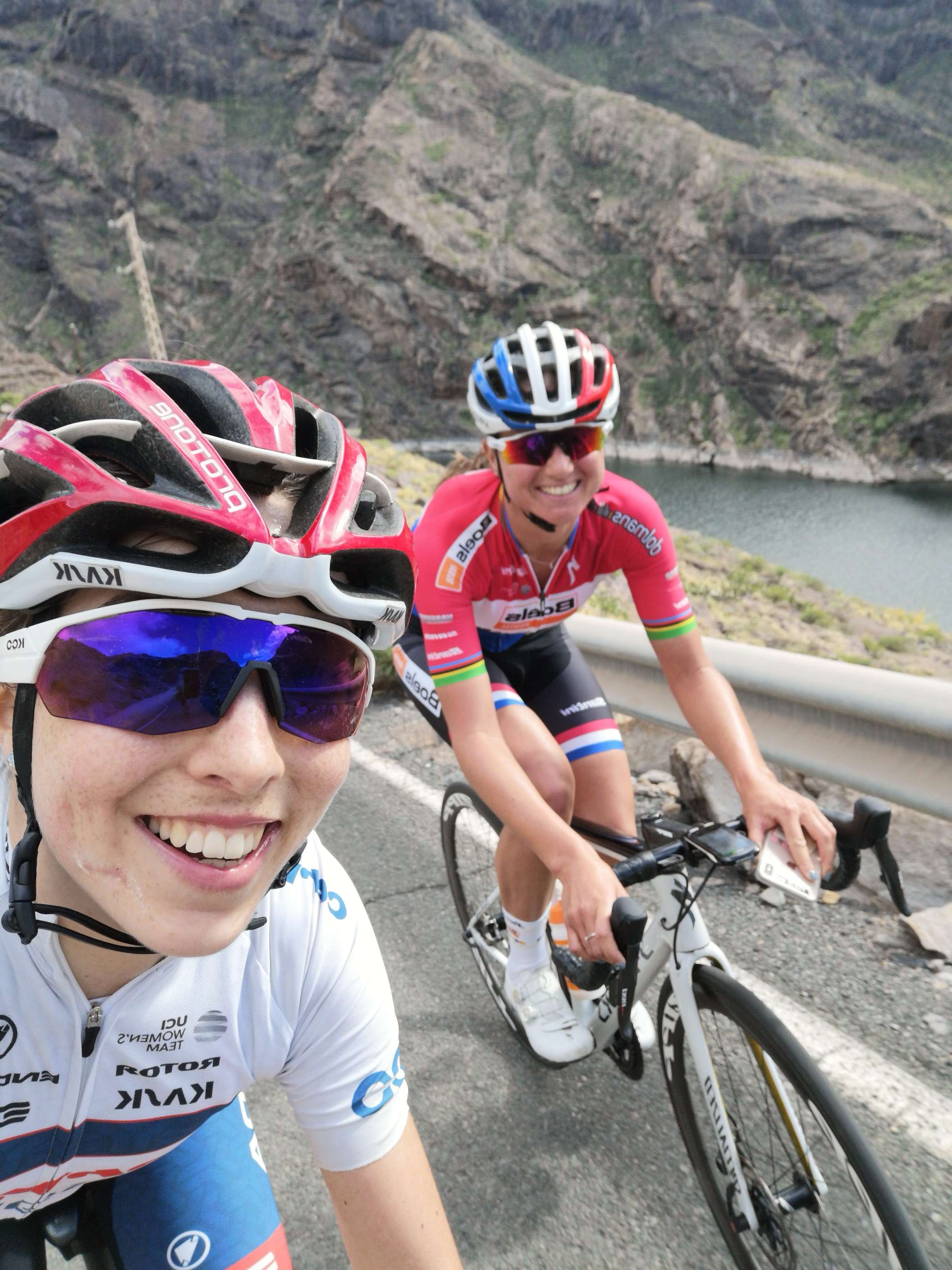 I always have a smug feeling when I’m in 24 degrees heat and it’s 20 degrees cooler back home! It was the first time I’d visited Gran Canaria and you can tell from the first ride that it’s a volcanic island; first half up, 2nd half downhill, as well as the ride profile on training peaks looks like a pointy volcano ?
Training was going very well; good feelings, good numbers, good food. It was also great being with my 2 teammates and getting to know each other more, which is important for the busy year to come with each other. 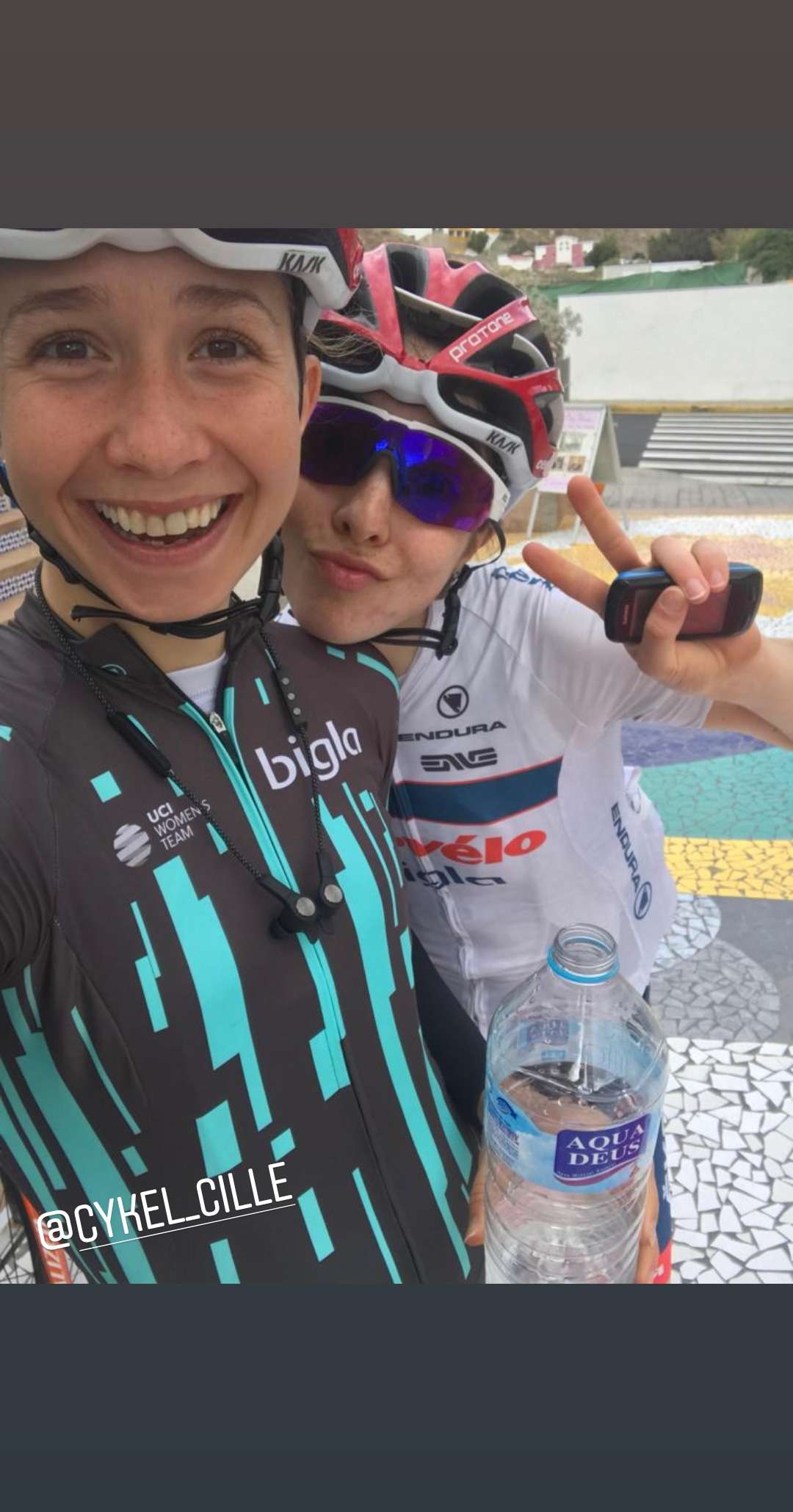 However, at the start of the 2nd week of the training camp I developed a sudden knee injury. I was in the middle of doing an effort uphill, and suddenly I felt a twinge. Ooooh. That didn’t feel too good. Get home ASAP.
I’ve had knee injuries in the past, and have just committed to the training session and completed the ride, but it’s so not worth it. I’ve learnt you’ll lose more than you gain. A couple more efforts? Another hour? Is it worth it? Nope, it will most likely just prolong the recovery process. 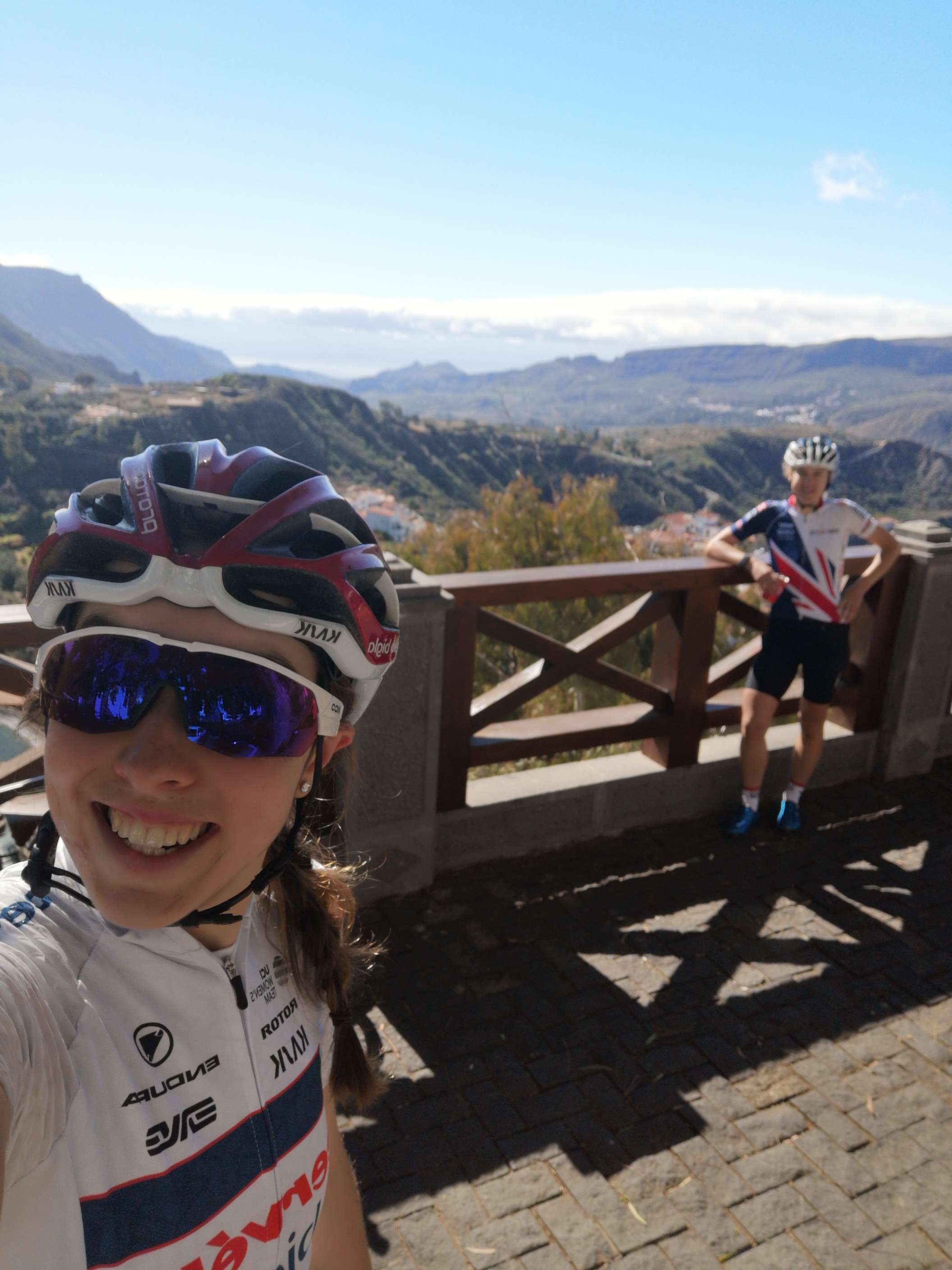 It’s so easy on a training camp, in 24 degrees in the mountains, to push on and get the most out of the trip you’ve planned and payed for but I controlled myself and ride back to the apartment pronto.
To cut a long story short, it wasn’t getting better. I was icing it, stretching, foam rolling and ride really steady some days to test it but it was the same a week later. Shame to miss half the training camp, but at least I could start working on the tan and getting a plan to solve the issue when I was back home. Luckily the team have support from Crossklinik in Switzerland where they could help my injury and discover my leg length discrepancy also! 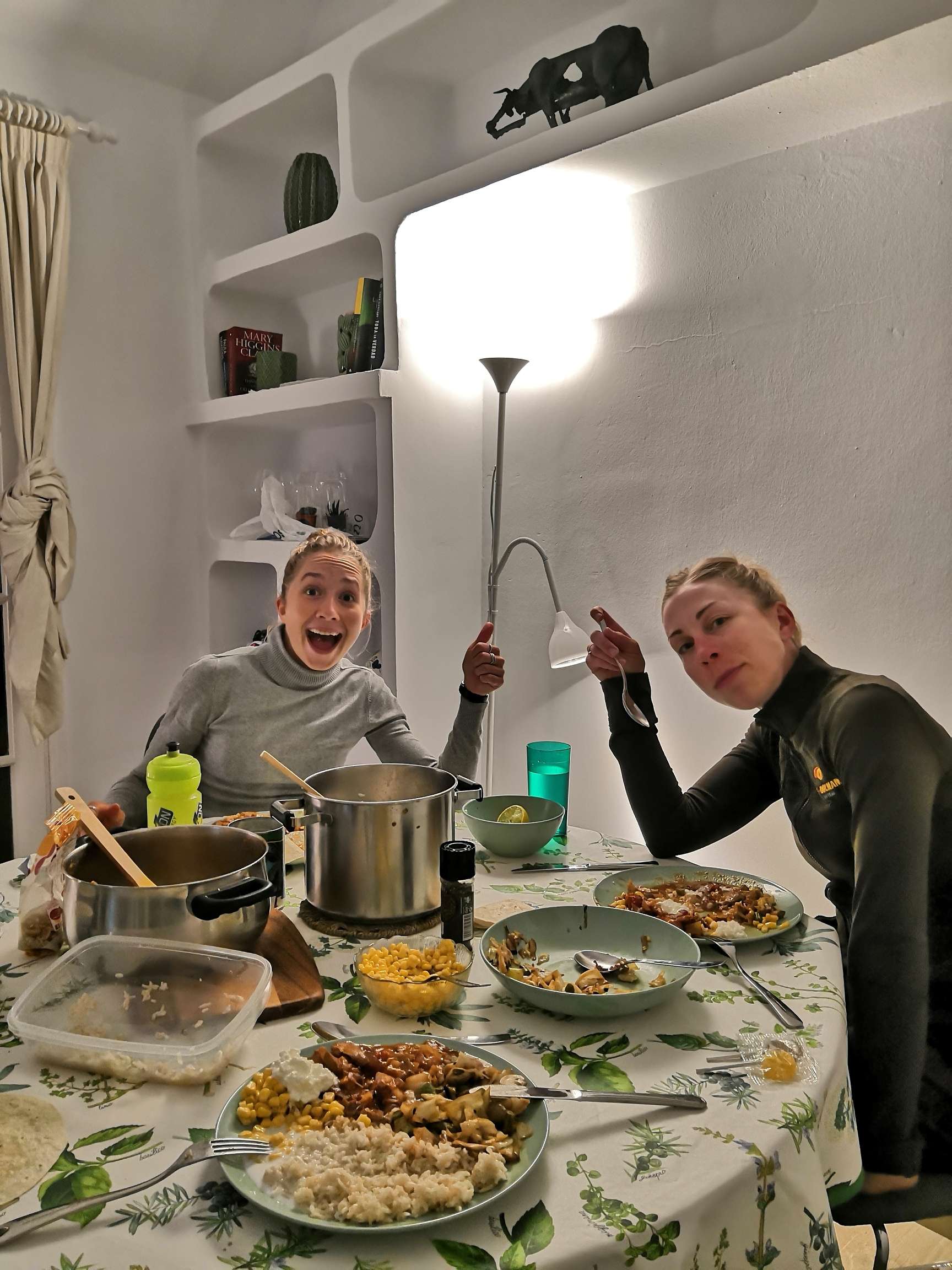 By this point it was coming up to the end of February and the race season was about to kick off with a 4 day stage race in Valencia. I was on the pathway to be going well in Valencia with good form, but my injury prevented this unfortunately. I don’t like to miss good races which I’ve trained and prepared for, but I had to look at the bigger picture. It was only February. Yes I’ve missed a month or so of training, but I’ve got 8 months left of the road season with much bigger and better races on the horizon. I’m not a very patient person and when I want something, I want it pretty quick! But I must remember that I’ve hopefully got 15+ more years in professional cycling, so that’s 15+ more seasons to achieve success. This is my first year as a professional, so experience and learning is going to be a huge part of it aside from just results. 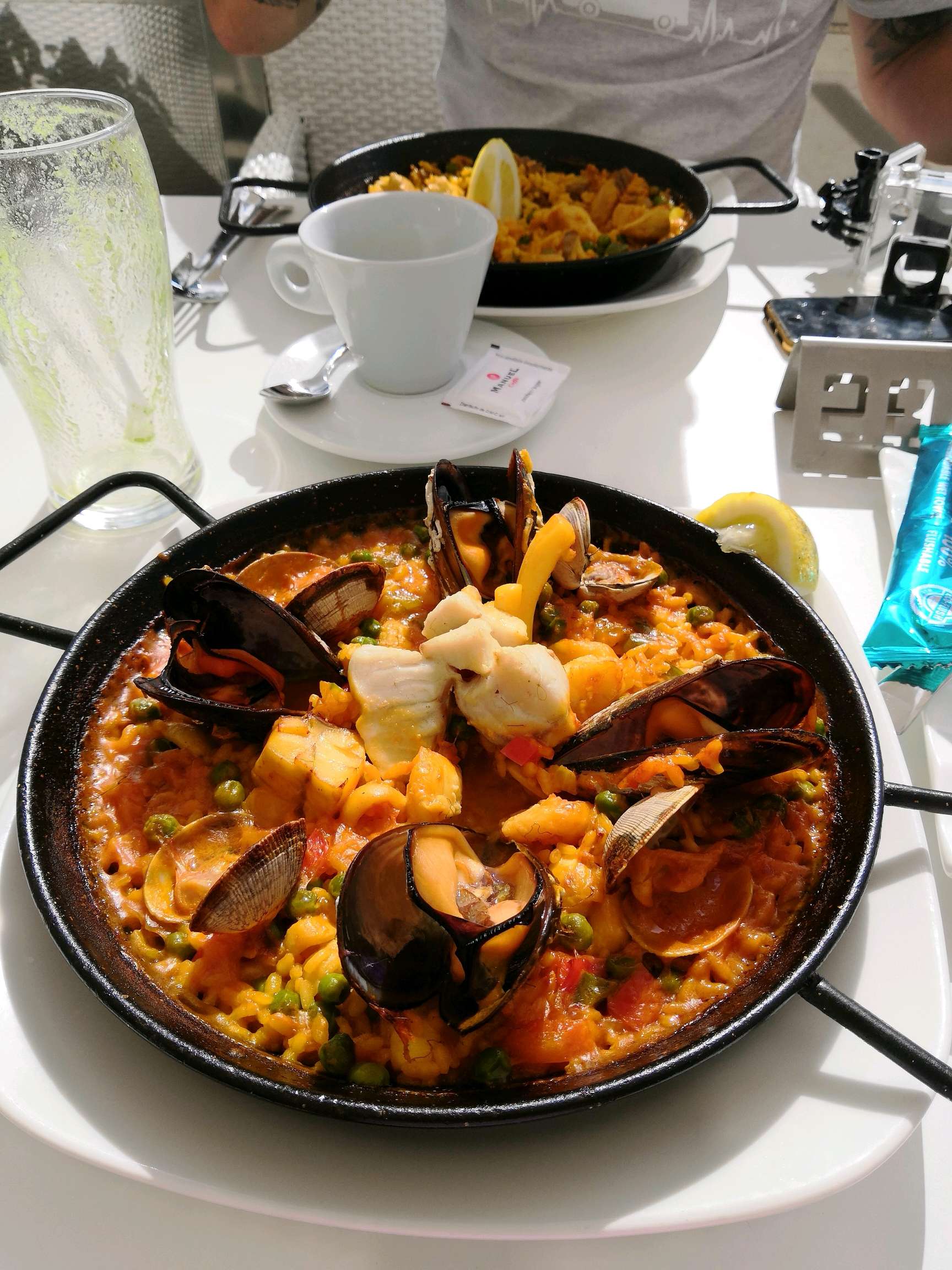 Injuries are very annoying and disruptive, but it’s all part of the job, the sport, and actually an opportunity to learn about your body if sometimes you just need to back off a little. Listen to your body. I get told this a lot.