Leah Thorvilson – I am ready to make my second chance count

Hey everyone! I’m super excited for the opportunity to share my thoughts, dreams, and experiences with you all over the coming season. I feel a bit redundant telling my story as it seems like I’ve told it a hundred times before, but I suppose there are plenty of people who haven’t heard it or don’t really know my background, so I’ll go ahead and share it anyway.

2017 was my first year riding for a UCI pro team… actually it was my first complete season of racing a bike at all. I had always been a runner. The marathon is where I found my niche, as well as my passion. I loved the training and I loved to race. Between 2004 and 2014 I competed in over 40 marathons. I even had the chance to participate in the US Olympic Trials Marathon in 2012, though I was nowhere near making the team – I was 55th … but hey, I was there!

Years of running high mileage, being inflexible and probably having poor biomechanics over time led to a series of injuries that would eventually require four surgeries in less than three years.

In my rehabilitation from the last surgery, I was told not to do ANY high impact activity for at least one full year, so I decided to take up cycling. I registered for a 100 mile ride before I even owned a bike as motivation to get started. My first ride was July 2, 2015.

Just four months later I had the final surgery, and in the rehab initially I was only able to ride a stationary bike. This is when I started using Zwift. My friends Tom and Missy who knew I had started working out on Zwift told me about the Zwift Academy program. I thought it sounded like fun and a good way to challenge myself, so I made a mental note to sign up when registration opened a few months later.

I didn’t start the program thinking I might even have a chance to win. I had never entered a real life bike race. Zwift Academy began in June, and from June to September we had to complete 27 workouts and nine group rides to graduate and be considered for the semi-finals. 12 of us were selected from the graduates to move on, and from September to December we had another round of workouts and tests to complete before three finalists were selected to join the team for training camp in Mallorca. At the end of the camp I was chosen as the winner of the inaugural Zwift Academy, and was awarded a one year contract to race on the Canyon Sram Racing team. 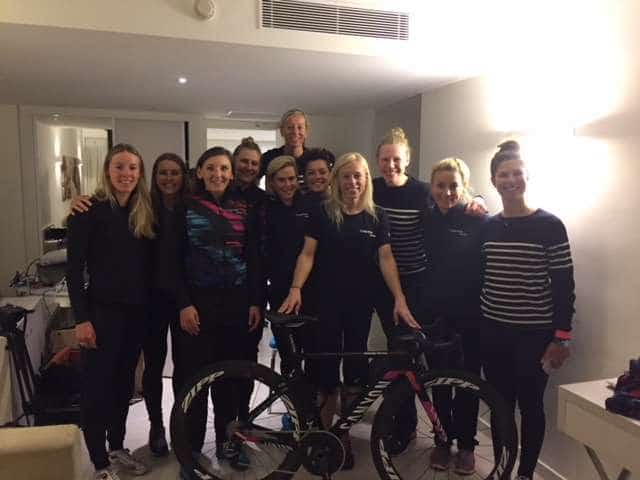 My first year as a pro was as you would expect it to be, for someone coming into the sport with such little experience. It was exciting, intimidating, terrifying, and inspiring all at once. I imagine I made every possible mistake a first year pro could possibly make, and then some. I crashed (plenty of times), I cried (yes, even during a race once or twice), I had a wide array of wardrobe malfunctions (pro-tip, always pin the zipper on your TT skinsuit). I was thrown in the deep end and spent the season learning to swim.

Despite the challenges though, it was the most incredible year of my life. I learned how much skill and craft there is to riding a successful bike race, I learned what it means to be a pro both on and off the bike, I learned that I’m much emotionally tougher than I ever thought I was, I learned that I still have so much to learn. I’ve ridden alongside the most talented female cyclists in the world, many of them I am now blessed to call my friends and mentors.

The 2018 season is now underway! I’ve just returned from ten days in Australia, where myself and the new Zwift Academy winners had our first races. Side note: If visiting Australia is on your bucket list, bite the bullet and plan a 10 day training/vacation there during next year’s Tour Down Under. It’s hot while many of our home towns are frigid, and it feels like half the country takes off work to come down and be part of the experience that is the TDU.

Every day you can find a cycling pilgrimage out to that day’s stage. The energy is incredible, the scenery is breathtaking, the hills smell of eucalyptus, and did I mention the coffee yet?? As for the Zwifties’ racing, we literally did a bit of everything; a kermesse, two crits, a Zwift eCrit, a Zwift duathlon (this was a world first for Zwift with the recent addition of Zwift run), and finally a car park climb on our last night down under. The results weren’t exactly what I had hoped for, but it was great to knock the dust off the racing legs and prime for the upcoming season.  I could definitely see progress in myself from this time last year, and that was really rewarding. 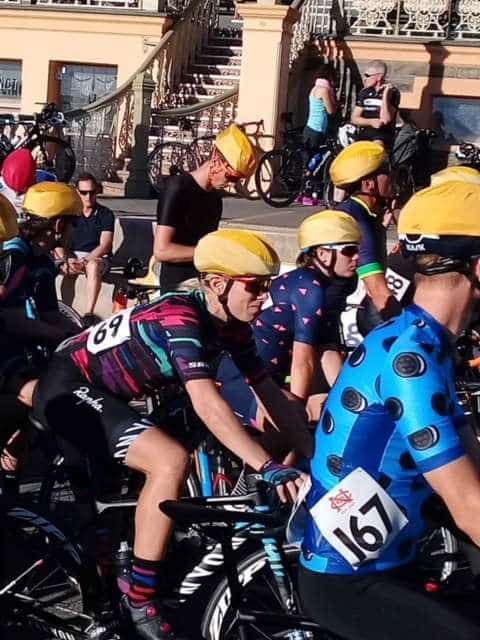 Looking ahead for the rest of the year, the most important goal for me will be continuing to gain confidence and to become a consistent and reliable teammate. We have so much talent on our squad, and I want to help put those girls on the top step of the podium. 2017 was all about learning. I was given a lot of grace from my team and from myself because everything was new. The expectations will be different this year. I know how fortunate I am to have been given a second chance, and I aim to prove that it was worth giving. I’ll catch up with you all again in a few months. Ride on!