Introducing the 2019 winner of the Zwift Academy, Jess Pratt

Hey All! I’m Jess, and I’m stoked to have been given this opportunity to blog for Voxwomen in 2020.  I am fortunate enough to be the 2019 Zwift Academy winner, and member of Canyon Sram racing for 2020. Seeing as I lack experience in the pro peloton, I figured this blog would be a good opportunity to introduce myself!
I was born in Michigan, USA, five days prior to my dad completing the Ironman world championships in Kona, so you could say endurance sports is in my blood. Raised in Brisbane, Australia, I spent years watching dad wake up early to go ride his bike before work, and all I wanted to do was be like him. I wouldn’t say I’m totally new to cycling; at 22 years old, I’ve been riding my bike since I can remember, and racing since I was 11! 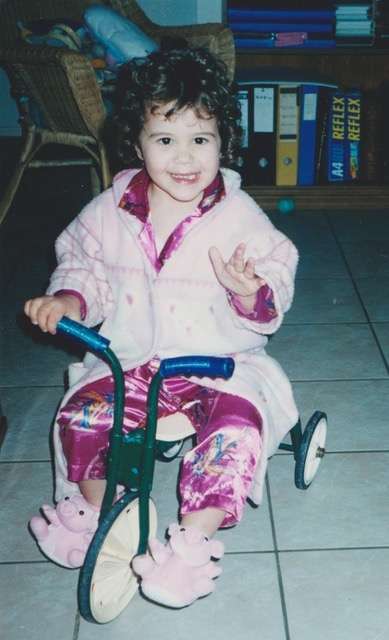 I was introduced to cycling through triathlon, but quickly learnt that the blue and black line at the pool was a bit of a chore (although burger night at swim club was mighty fine…). I still loved triathlon, but the bike was my true love.
A bit of google searching and a few weeks later I found myself at the local cycling club race. This was a handicap, and luckily they handicapped this newbie a bit too much, and sure enough I never got caught and won myself a $5 note and may have even scored myself a post-race soft drink (cheers mum and dad). At 11 years old I was hooked.
The years have flown by however one common theme 11 years later is that I still love riding my bike. A bit of track, a bit of road and even a bit of MTB (50km on an MTB is a looooong way!), it’s safe to say I love this sport and its various disciplines.
I’ve spent my last 22 years growing up in Brisbane, Australia. A mild climate, close to beaches and hills, and a very liveable city! I think I’ve been pretty lucky. I am grateful for the opportunities sport has given me over the years. Many Aussies have never left Australia. I’ve been lucky enough to race in New Zealand, USA and Europe, whilst also racing all over the Australian country side! 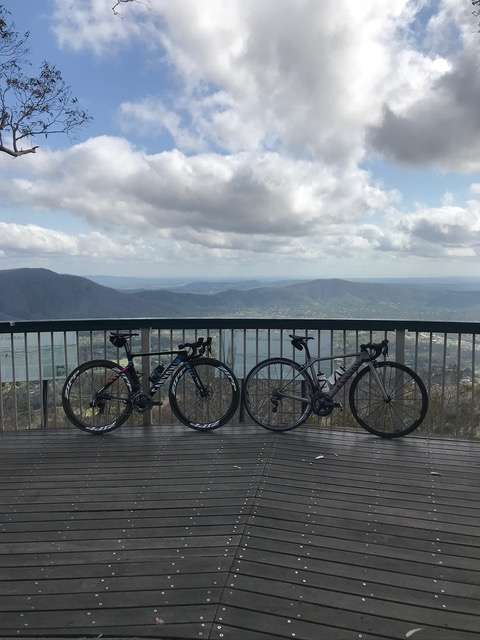 I am incredibly lucky to have grown up with a very supportive family. Always supporting me to achieve my dreams and goals. My dad and sister both ride, so it’s a bit of a family sport. My dad has taught me a lot, I wouldn’t be in the sport without him, and he still goes out and puts out 40hr/ 1000km weeks every once in the while. He has definitely passed on his never give up attitude and that has shaped me as a person. My lovely mum, although she does not ride, she has stood by me through thick and thin. I have a  very valued and cherished relationship with her. From celebrating the highs with me, while also being there in times of need (too many concussions and hospital trips for a 22year old!). 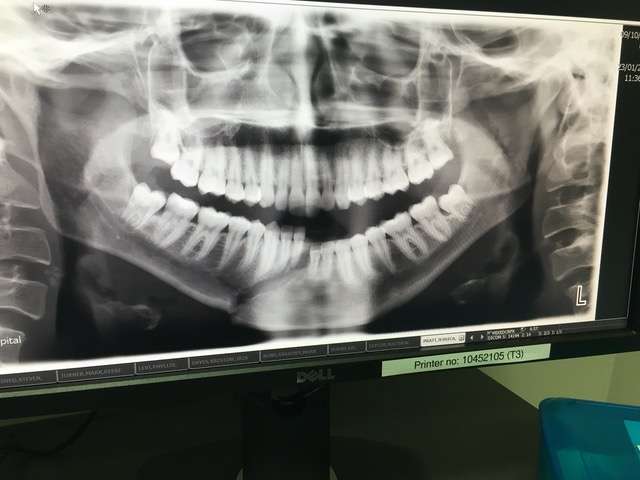 I am so lucky to have such a supportive human being in my life. And finally Em, my little sister, what a gem. We are lucky enough to share the sport of cycling, and she’s an amazing training partner, but also a wonderful person. I have a great relationship with Em, and I love how she is always there for me.
I am also fortunate that my ever so amazing boyfriend, Matt, also rides. He induces a lot of pain on me up hill, but all in all is an incredible training partner and human to share life journeys with.  What I am sure of is that I wouldn’t be here without any of these amazingly supportive people. 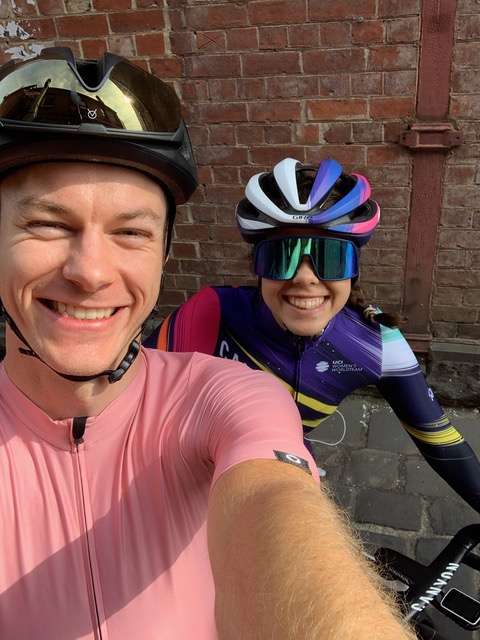 As well as a cyclist, I am also a Registered Nurse here in Australia. Prior to winning Zwift Academy, I was 4 months into my graduate year as a Registered Nurse. I am proud that I can call myself a nurse, it gives me great joy being able to make a difference.  Nursing is a very stressful job, emotions run high, and you are always under the pump to complete due tasks. And shift work, well that’s a challenge! Nothing like some instant coffee at 2am to keep you going! All the while, it is extremely fulfilling. A job that in some ways has similarities to cycling. Team work is essential, while communication is crucial just like on the bike. You also need to be adaptable and able to think clearly under pressure, a challenge which I love! It granted me a unique perspective on life that has changed my outlook on the world. 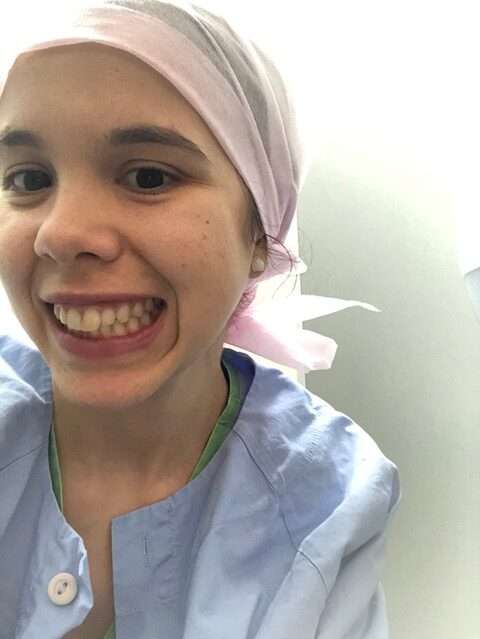 I did say earlier that I was not experienced enough to give at advice, although maybe I do have a lesson or two that some of you reading this may be able to use. Prior to even starting Zwift Academy, I was going through a bit of rough patch with both health, and career goals. I guess I felt a little bit lost. In my final semester of nursing I struggled through endless hours of placement (over 300hrs!), attempts to continue training, fatigue, and constantly getting sick. My body was not healthy. I was not in a healthy place, and as much as I wanted to one day become a professional cyclist, I felt as though I was watching my dream slip away.
I graduated university and went on a European Holiday. A month without a bike. Rather foreign to me. I realised that through both injury and illness, in as long as I could remember I had never ever taken so much time away from my bike. I was fearful at taking so much time off. All the hard work I had put in over the years, would it just disappear?
I went to Europe with my family, travelled around, walked many kilometres and even saw the Tour de France. I also visited Malta, the home country of my Nanu, which was special. And I always had a smile on my face. I returned as a different person. I had forgotten what it felt like to have energy or wake up in the morning and be excited to ride my bike. I felt different. A break was what I needed. And funnily enough, I actually didn’t lose much fitness at all. Turns out carrying a 20kg backpack around Europe is good for your fitness! 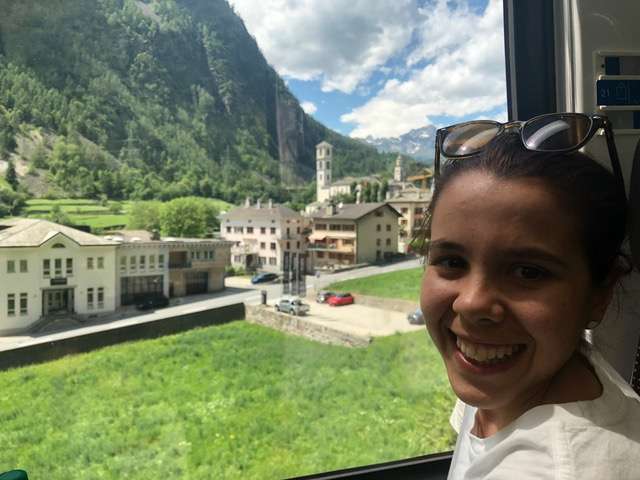 One difference I noticed in myself was my ability to push myself. I found new limits after returning from Europe. I had fresh goals, a new passion and I was recovering and sleeping better than ever. I was a new person ready to embark on not only a new challenge at work, but also Zwift Academy.
Zwift Academy started a week after my return from Europe. I had signed up to Zwift Academy while in Europe. Entering a new grad position as a nurse, I thought it would be a fun and time efficient way to get fit again. I had also met both the 2016 and 2017 Zwift Academy winners (Tanja and Leah) at Tour Down Under in 2018, and having had the opportunity to talk to them about their journey I was inspired to try it out for myself. I spent many hours on Zwift in the coming weeks in a bid to get fit for my first national road series race of the year in 8 weeks’ time.
To start with I didn’t really have any expectations. I’d previously met some very strong girls who hadn’t even made it through to the semi-finals. But as the weeks went on, I guess I realised just how stoked I would be to get through to the next round.
Receiving a semi-finalists email at 4am prior to going training before work was a total shock. At this point the dream becomes a little bit more real. A 1 in 10 chance of winning a professional contract is pretty unreal. It was all hands on deck once I received the semi-finals sessions. I had 14 days to complete 4 Zwift indoor sessions, and 3 outdoor sessions. Sandwiched between two national road series races, it appeared I only had 7 days in which I would have an opportunity to complete these sessions, and only 3 days off work to complete the outdoor sessions.
I treated it as a bit of a tour. Organised my sessions as best as possible, to ensure I could get the most out of myself, while ensuring I managed fatigue from work. Possibly one of the harder 2 weeks I have ever dealt with. Although the anxious wait to find out who the finalists were, was just as hard. 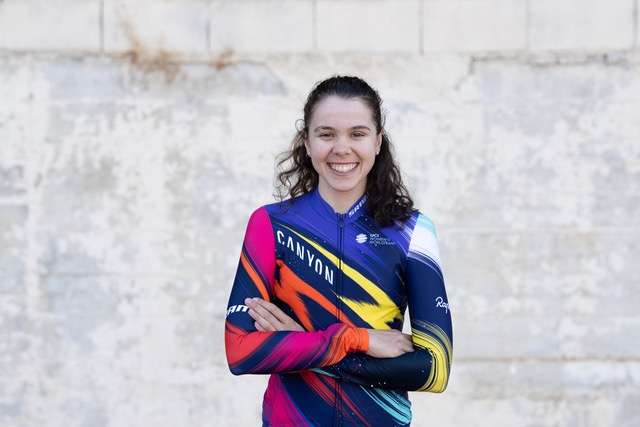 One sleep deprived morning after I had finished a run of night shifts, I received a call from Ella Harris informing me that I had made it to the finals. To be honest, I wasn’t sure if I had fallen asleep and was dreaming or if it was actually real. I had to tell someone, sure enough my little sister was around smashing out a Zwift session.
2.5 weeks to Spain for what would be the Zwift Academy finals, and also the Canyon Sram training camp. This also happened to be my first time to Spain. Maybe I should have paid more attention in primary school Spanish…
I had nothing to lose, and all to gain. I was just so stoked to be there. Potentially the most stressful days of my life, but relating this back to my nursing, I feel as though I had built many skills to combat stressful situations in life. I still can’t quite believe that I won the 2019 Zwift Academy. After the announcement I spent a solid few days emotionless. It took me a while to comprehend what had happened. Sure enough once the enormity of what had just happened sunk in, there were some tears of joy!

It’s now January 2020, and I am sitting in Geelong preparing to race the first WWT race of the season, Cadel Evan’s Great Ocean road race.
Prior to this, I have already raced The Australian National Championships and Tour Down Under where I finished 9th on the general classification. Feels surreal to start the year in my home country. Stoked to be a part of the Canyon Sram team. But most of all grateful that Zwift and Canyon Sram create such a pathway.
Here’s to an amazing 2020! Grateful to be living what feels like a dream!

Anyway, I hope I didn’t bore you all too much… until next time!
Thanks for reading!
Jess Pratt