Hello! We are InternationElles, a team of ten female cyclists and four support crew from all over the world who are brought together through our passion for cycling, adventure and equality. This July, InternationElles will cycle all 21 stages (3,460km) of the world’s greatest bike race across France a day ahead of the male professional Tour de France race. We will join the Donnons des Elles au Vélo J-1 project, which comprises a French team of 13 riders and eight crew.

We are excited to document our journey on Voxwomen over the coming weeks.  This is our first blog to give you an idea of what we are aiming to do…

Our InternationElles team is comprised of amateur female cyclists, including Ironman triathletes, Guinness World Record Holders, Ride Across America record holders, Red Bull Time Laps 25 hour Race Champions, Haute Route winners and endurance athletes like none you’ve ever met. We are from all over the world and were brought together in February by the powers of the internet. We will meet for the first time in Brussels the day before we begin our three and a half week adventure.

The team are all from different riding cultures and varying professional backgrounds, from accountants to marketeers, game designers to consultants, journalists to scientists.  We range in age from 27 to 46 years old and there are a number of children between the group.

InternationElles has been created to promote and champion equality in every walk of life.  We firmly believe that every person should be respected as an equal, regardless of gender, colour, cultural background or social economic status.  To us, the medium of cycling is just one way to raise this agenda and to focus on the gender inequalities in cycling in particular. We believe there should be a stage race for females in France equivalent to the men’s race. There was once a stage race for women in France, so why not now? Or why not work with the professional female teams and invest in creating something new?

Women’s equality is continuously being discussed at greater levels, but if we can’t fix something as simple as a bike race how are we to fix the far wider inequalities experienced by women and girls around the world? We hope to empower female riders of all ages to get on their bikes and enjoy the great outdoors, get interested in women’s racing and to support the fact that women need their stage too. The female pro-peloton has shown time and again (when it’s been televised) that they are more than capable of incredibly exciting racing across single and multi day events. We want to see more!

We will be riding 3,460km from Brussels on 5 July to Paris on 27 July, via the Alps and the Pyrénées. The ride takes place over 23 days and comprises 21 stages varying in length from the time trials, which are just 27km, to the longest stage, which is 230km from Belfort to Chalon sur Saône in NE France.

With 30 classified cols and five summit finishes, the 2019 route will be the most mountainous in the 106-year history of the event so it will be challenging for the pros just as much as for a team of amateurs with day jobs!

Some of the Alpine climbs that avid followers will recognise include the Col d’Izoard, the Col du Galibier, and the 2,770m-high Col d’Iseran – the highest paved mountain pass in Europe. The final stage before Paris ends with a 33.4km climb up to the 2,365m-high finish at Val Thorens.

Training for the Ride

Each team member has her own training programme planned, with everyone fitting training around full time work and family commitments. Thankfully the days are getting longer and warmer in Europe, and cooling down in Australia so those early morning starts and late night rides will be slightly easier to do. Commitments don’t stop, so it will be about having the discipline to train, even when we don’t feel like it, to train smart – sometimes shorter can be more effective if done the right way – and also to get longer rides in as much as possible. Increasing time on the bike and riding multiple back-to-back days in training will be key. During some of the bad weather we’ve had this year, we have been motivated and encouraged each other to train indoors when outdoors isn’t possible.

Our riders have already participated in a number of amateur events this year, such as Revolve24, Mallorca312, Tour of Flanders, UCI World Champs in Greece, Haute Route Oman, 300km audaxes and the Race Around the Netherlands. All good preparation for both fitness and a mental toughness, as well as testing out nutrition on and off the bike – key elements to ensure twe make it to the end of each stage as well as to Paris in good shape.

A number of the team in Australia are friends and will be training together when they can. There’s also a concentration of riders from the London area, who similarly will try to train together at least once before July – busy schedules depending!

Behind Every Great Team

This ride wouldn’t be possible without a dedicated support crew. The “Fantastic Four” will do everything from drive support vans, man social media accounts and help keep the team fuelled and their bikes on the road over the 23 days. The logistics of such a ride are massive and a huge amount of planning has already gone into putting everything in place.

The crew will come into their own out on the road where we will have two support vans to follow us and then transport us to and from the start each day, as well as on to the next resting place each evening. The longest transfer will be between Val Thorens to just outside Paris, some 600+km away. Thankfully the final stage starts at lunchtime!

Help us to take a stand against inequality and effect change.

Thanks for taking the time to find out a little about us, we look forward to taking you on this exciting journey with us! 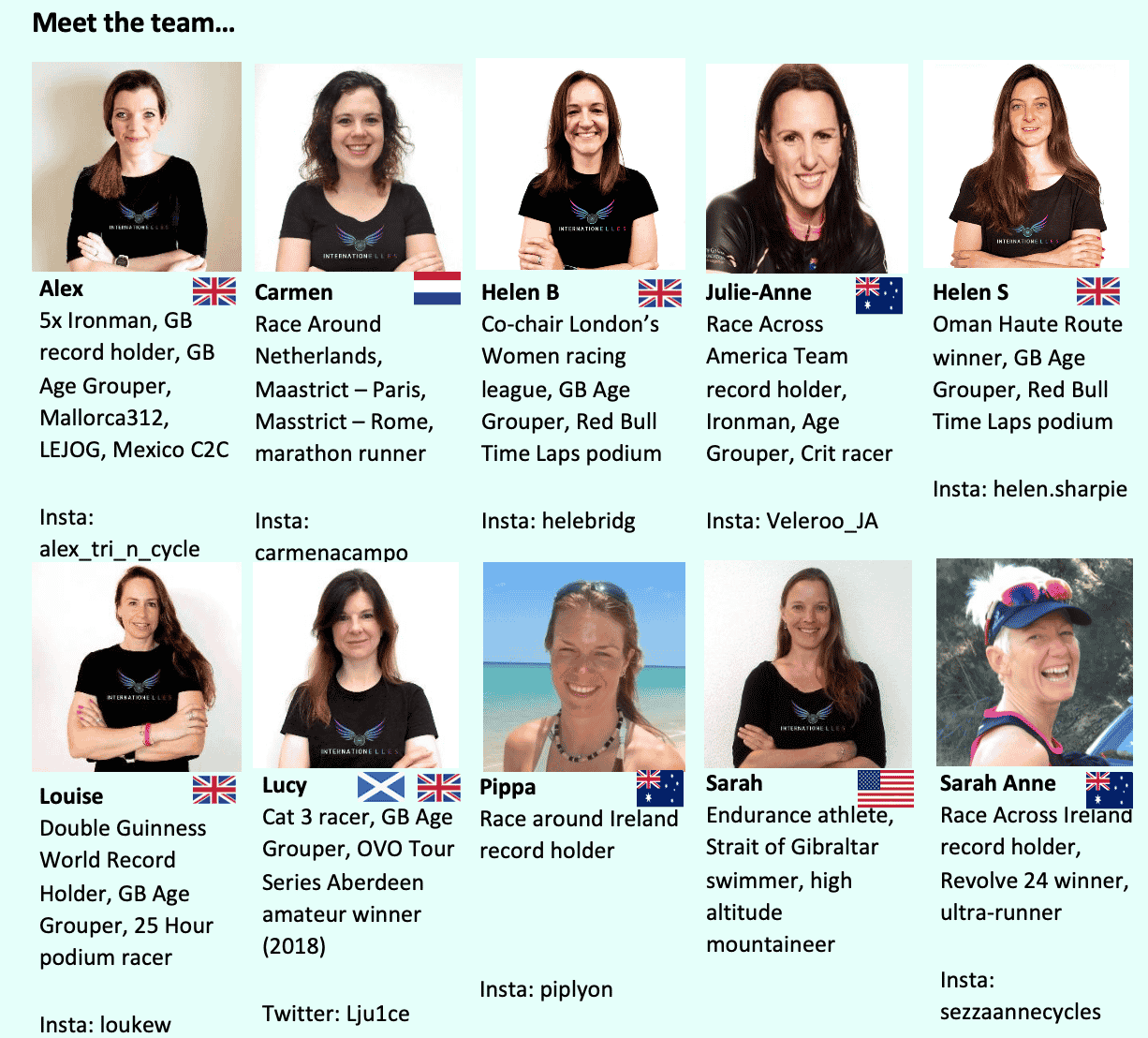