It seems the list of “firsts” does not end that fast after turning pro:

First stage race, first doping control, first team camp, first WorldTour Race, first spring classic, first lead out, first jersey win….an almost endless list of things I experienced for the first time during my journey in the last 1,5 years and a lot of those experiences I shared right here with you in my Zwift blog on Voxwomen.

So it’s just following up a matter when I share my latest of firsts with you: my first altitude camp followed by a stage race on altitude!

In my life before cycling, I had short visits on altitude and never really liked it. Actually I detested it. Altitude meant headache, nausea and swollen limbs to me. So the idea of staying there longer than a few hours sounded like torture to me. And so was my last short trip to altitude during our “epic ride” in our December teamcamp. We rode up to the Sierra Nevada, Spain, which is around 3200 m high. When I arrived up there my blood oxygen was down to 74%.
(For scale: Normal oxygen level is inbetween 95-99%, a oxygen level lower than 85% is interpreted as a high-grade hypoxemia… ) Kind of scary but at least it explained my lack of brain function up the climb and during the following hike. Speaking English with no oxygen in your brain cells can be pretty demanding.

On the other hand I was always curious about how my body would react after a longer period up in those heights and how it would feel being back on sealevel afterwards. So spotting the “Colorado Classic” on my race schedule, a race with stages on 1600-2400 hm, made me feel a mixture of excitement and anxiety. The excitement overtook the wheel, as soon as I started to plan the preparation. 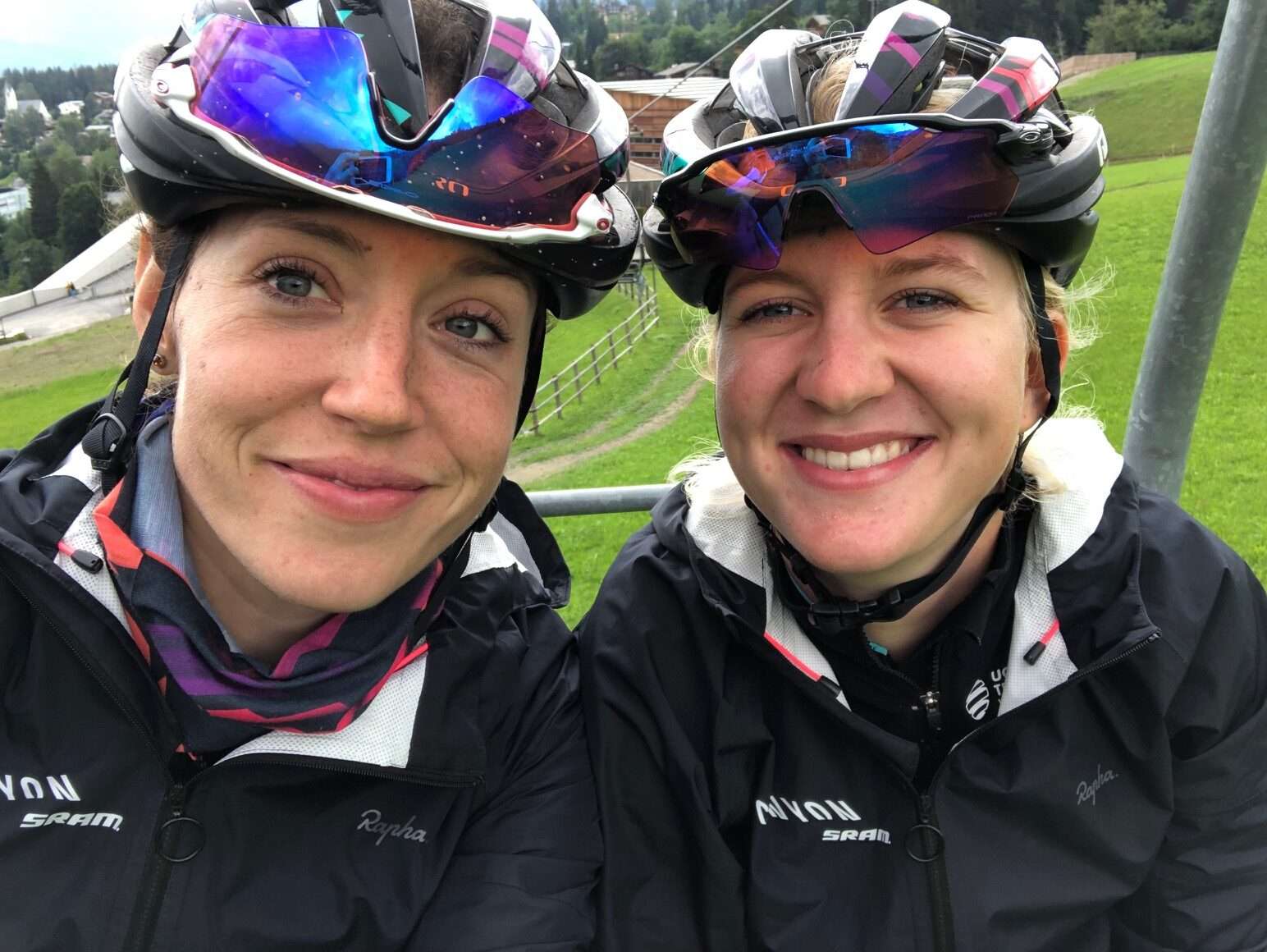 My first altitude destination on my way to new horizons was in Switzerland. I spent the time there with my teammate Hannah Ludwig. We were based on 1500 hm, and climbing up to higher highs during our rides. For me a good level to start with, since I felt an effect on my body, but it didn’t make me feel uncomfortable. However my first observation was, that I was always hungry. My metabolism was simply through the roof. I was eating and eating and still lost weight. For sure also a lot of water since dehydration is one of the obstacles altitude brings.
In general we were supposed to ride mainly “easy”. But I have to admit that an easy pace is actually impossible if you are riding with Hannah. My youngest teammate, who just won the U23 European Champion title in the ITT, just loves to ride with a steady high pace. After some days of acclimatization we also started with some efforts. You start your effort just like you are used to, but at least after the second repetition, you have to painfully realize how much your recovery is prolonged and how much faster your fatigue. Gladly a big problem on swiss altitude are cows blocking the road. So you might be lucky to get some extra rest if one of them decides to cross the road in the middle of your interval. 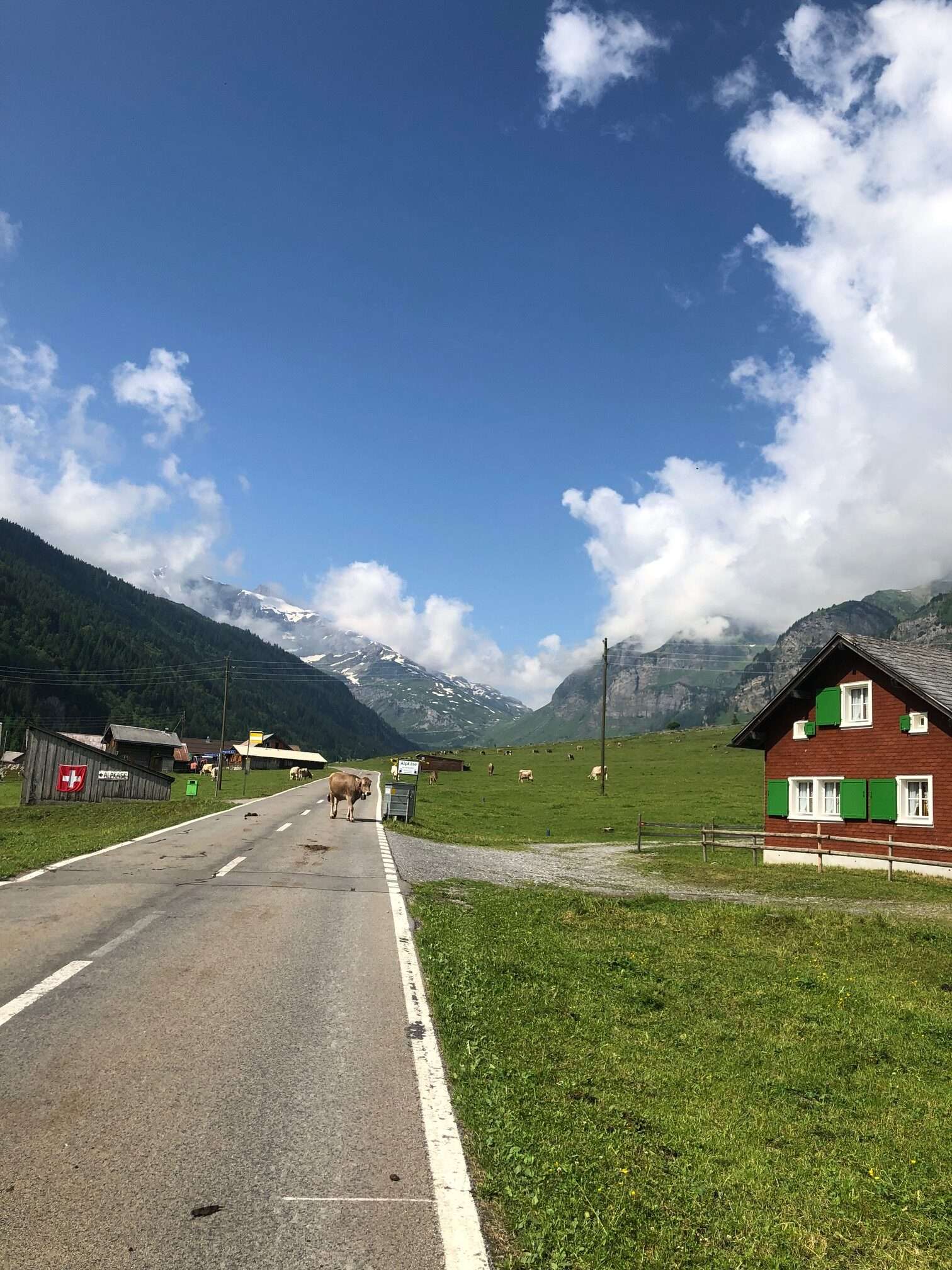 We were heading to the BeNe Ladies Tour in Belgium right after and what can I say… Back on sealevel I felt like a motorbike. And our results confirmed it. Finishing the stage race with our teammate Lisa Klein winning the GC plus Hannah in 6th and me in 5th overall showed quite a good effect from our short trip up the mountains.

And so it was already time for destination number two: Boulder, Colorado!
We traveled to the US almost two weeks ahead of the start of Colorado Classic. First of all to adapt, but also to get some good training in. The nice side effect: we also got rid of this awful jetlag. 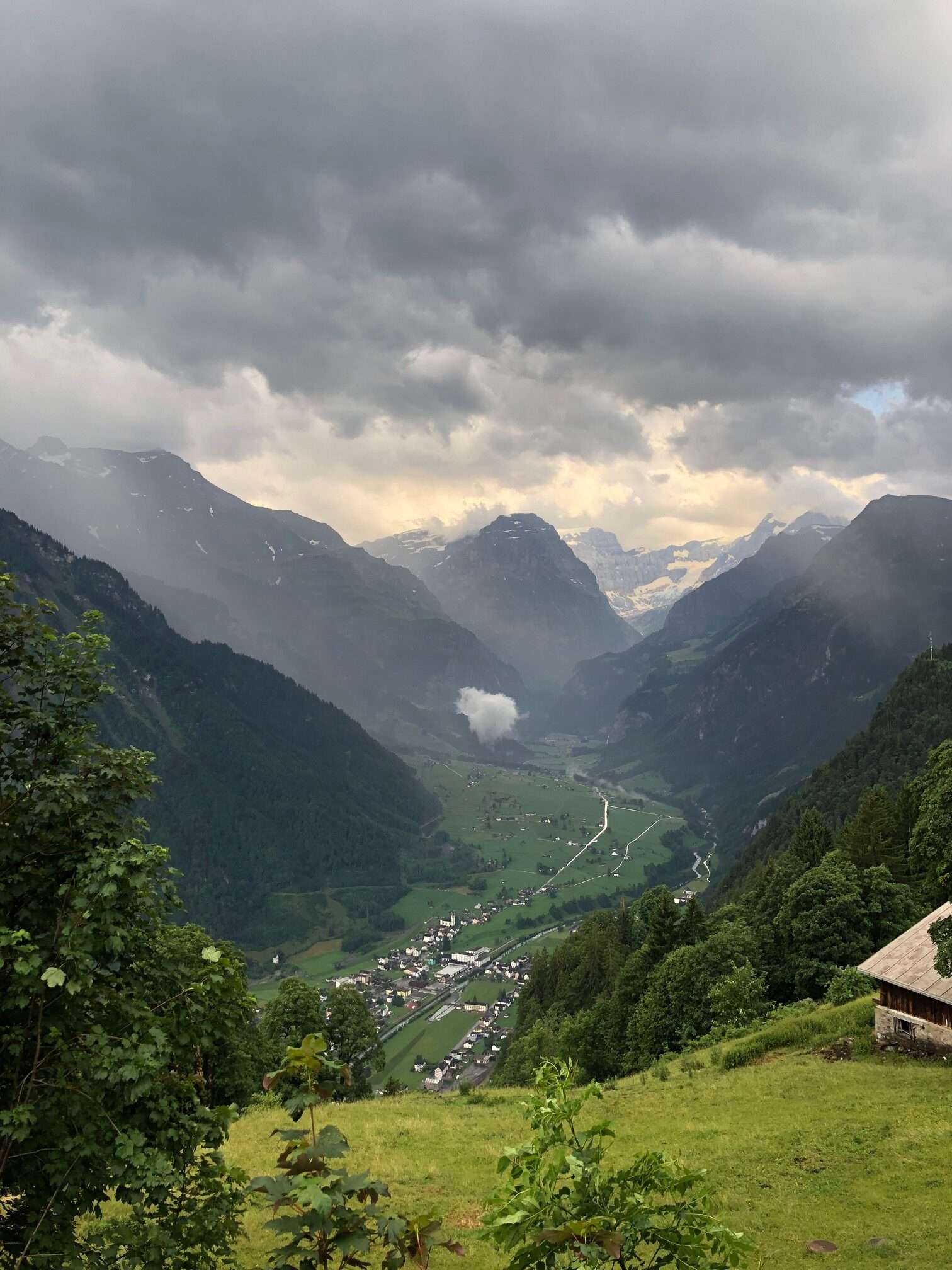 I heard and read a lot about Boulder. I guess in almost every endurance athletes biography this town is at least mentioned once. Now that I’ve been there, I do understand why. This place is simply amazing, stunning, beautiful and perfect for training.
One part of our Colorado squad was preparing in Boulder(Christa, Ella, Hannah and me) while Tiffany chose Livingo for her prep and our 6th member Omer got herself ready for racing in Durango.

The scientific side of the altitude experience increased this time since we had a pulsoximeter with us, to check our blood oxygen in the morning or during rides and to hopefully detect our adaption.
It was pretty interesting to see how different every single rider reacted. Ella for example didn’t feel a big difference and also her oxygen level wasn’t affected. While Christa and I struggled a lot in the beginning and Hannah found herself somewhere inbetween. On our second day we climbed up to 3100 hm. I was quite nervous to end up like in teamcamp in December, but actually with 82% my hypoxemia level wasn’t as bad as expected. Since we did the same climb again on our last day we had a great comparison and I actually ended up super happy with a 91% blood oxygen. 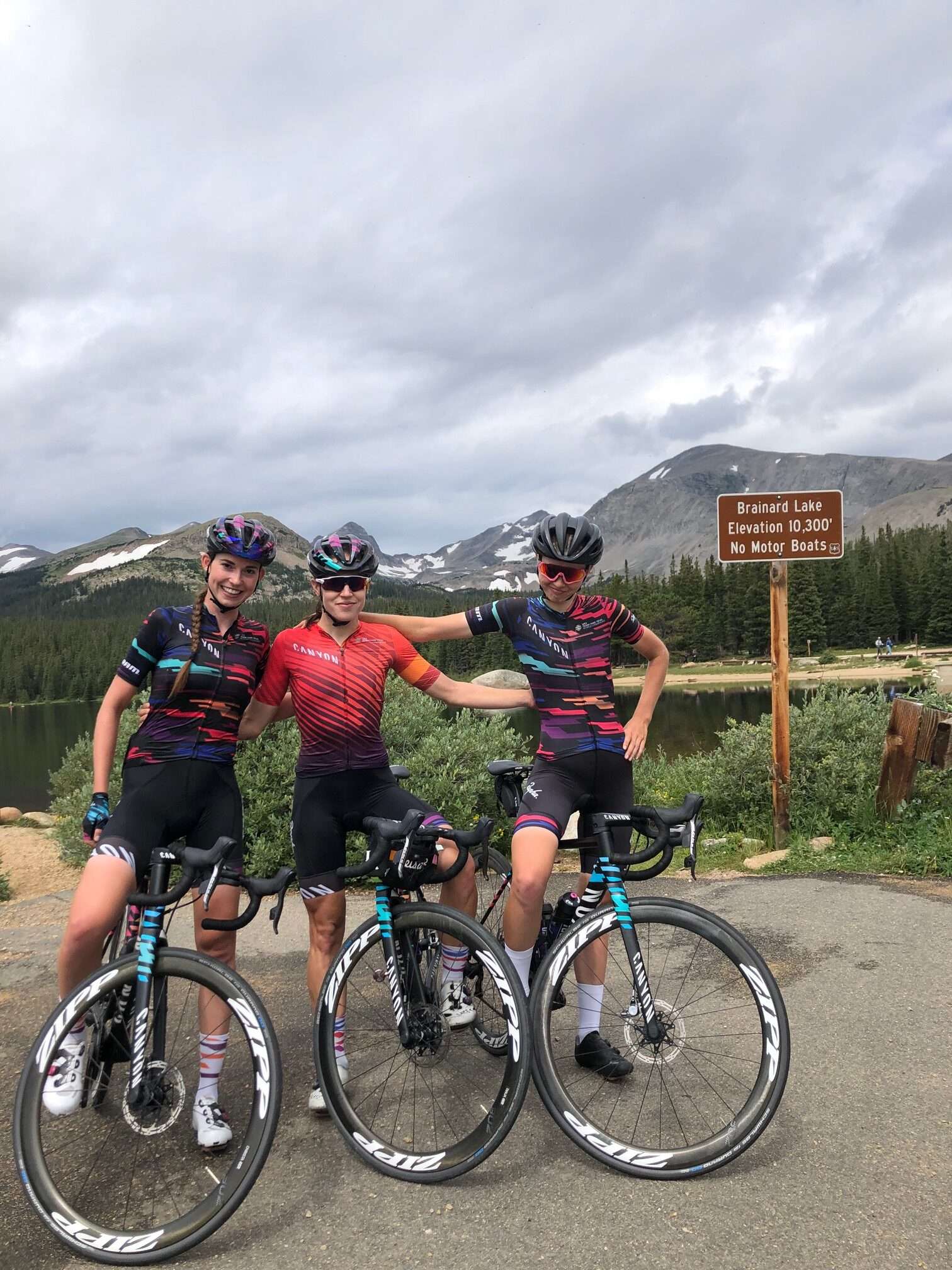 Last day of training also means: race day is close! After two easy days in Denver, the first stage was about to kick off in Steamboat Springs on 2200 hm, followed by the 2nd stage in Avon on 2400 hm, a lower 3rd one in Golden on 1700 hm and the last stage back in Denver on around 1600 hm. So not a walk in the park!

While training or efforts on altitude are one thing, racing on altitude is still another. So we were all pretty nervous ahead of Stage 1. It felt completely unpredictable  how we would perform even after our good preparation. As I can only talk about my own experience, I have to say that it wasn’t as bad as I expected it to be. But still the combination of altitude, heat and the profile made especially the first two stages pretty demanding for me. Your normal moves to jump, bridge or chase are way more limited in amount and also depth of efforts you can put in during the race. 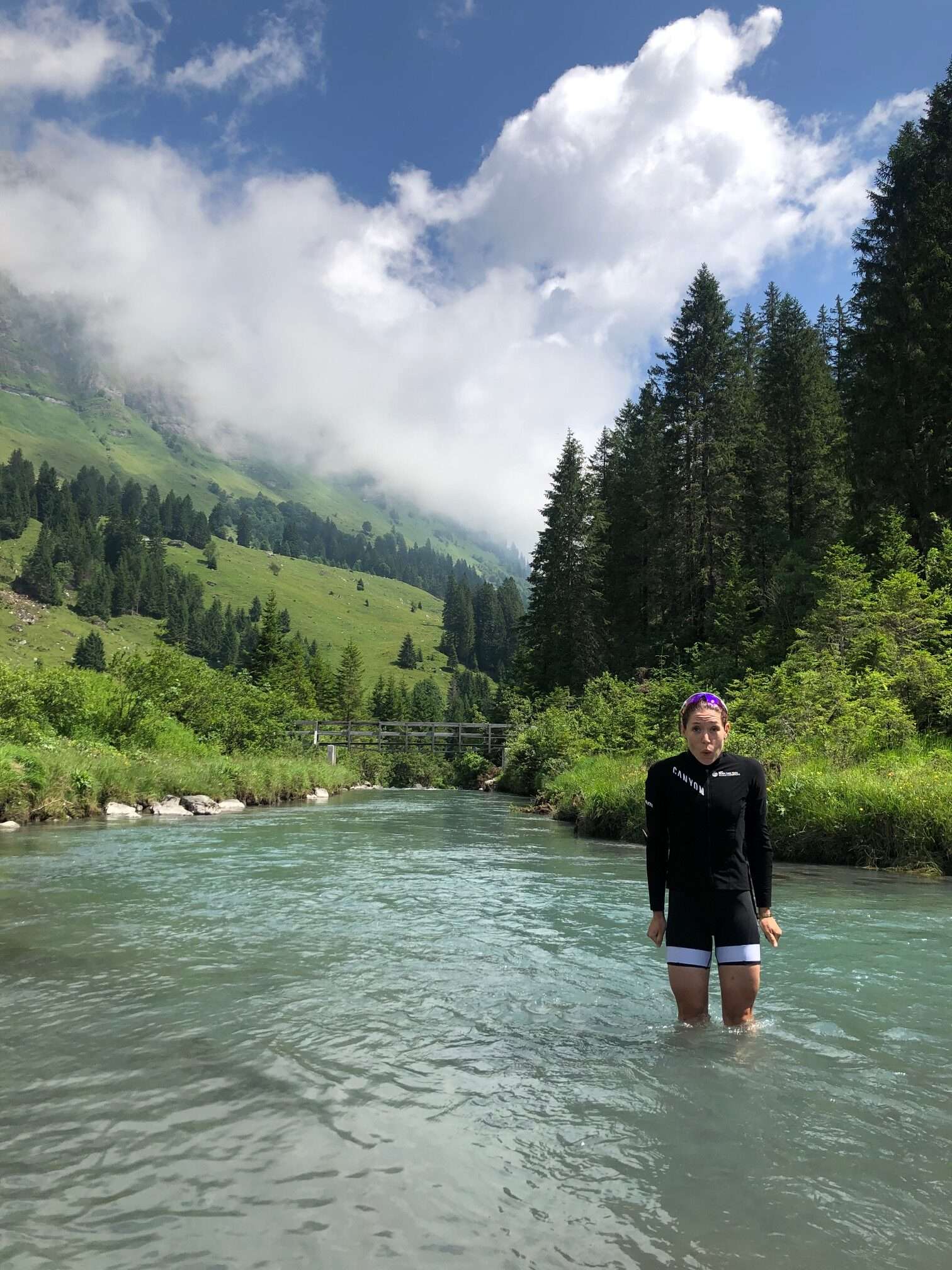 My average power throughout the races was around 20-30 Watts lower than on a normal level. And staying hydrated was probably one of the biggest challenges for me. In stage 3 and 4 I was the supported sprinter and I could save myself a bit more except of two all out sprints for the prime and the final. Yet another first time of my hopefully never ending list 🙂 In the end I’m  taking home one prime and two fourth places. We won the best team and have two girls up in the top 4 in GC.  Even though I missed the podium twice, I was actually pretty happy to get this chance and to be there in the final mix.

After all I can say that the altitude and me, we made our peace. Now I hope for some more motorbike feels, when I’m back on sealevel in a few days.

And i just can’t wait to breath all of that sweet sweet oxygen!

Until my next blog, thank you for reading, Tanja Erath