I found out I was nominated for the Voxwomen “Rider of the Year Award” (or Voxy) in late October. I read the list of nominees, and I was proud to be included in that group.

I thought the other nominees were a great representation of our sport, and when you look at every nominee, each was rightfully on the list. As a whole, it’s a group of women who represent our sport well, animate the races and get the big results.

It was both an honor and a surprise to learn that I won. You might be surprised at my surprise, but I guess the only thing I can say is that all of you still have better sense of my accomplishments than I do. I have a lot of respect for my competitors and what they’ve done this year. To win Rider of the Year amongst those competitors is humbling.  I’m still the same old Megan, and that Megan doesn’t get flown to London for 48 hours because she won some big award. I’m still not used to this yet.

Which is exactly why I said yes. Yes, I’ll fly to London for 48 hours and accept this award.

My results this year were well beyond what I expected. I set a goal for myself to win one Women’s WorldTour race and a third national road title. I won four Women’s WorldTour races, including the Giro Rosa, and the series overall. My national road title was part of a run of wins in the United States that began at the Amgen Tour of California and led to the Philly Classic. I know it’s real but sometimes I still find it hard to believe, and while I certainly hope to build upon my success next year, I feel the need to treat this all as a once in a lifetime opportunity. Who knows if I’ll ever be in the position again?
Beyond embracing the personal opportunities, I also feel a very real sense of responsibility to promote women’s cycling. The Rouleur Classic served as a forum to introduce people to my women’s cycling, and I’m grateful for that – and showing up was one way of expressing my gratitude.

I had an easy direct flight from San Francisco to London, landing at Heathrow on Friday morning. 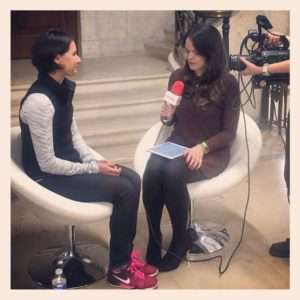 My schedule was brilliantly orchestrated by Emily Brammeier, my Boels-Dolmans teammate Nikki’s sister-in-law. She had provided me with an overview of what I could expect in advance and kept us on time and on task throughout the weekend.
It rained most of the day on Friday in London, thereby cementing my stereotype of typical London weather, but Emily and I braved the rain and went to lunch with Anthony McCrossan and Laura Winter. I spent the rest of the afternoon relaxing and fighting jet lag before I walked to dinner and called it an early night.

Saturday was award day, and it was jam-packed. Interviews began at 9:30am, breaking for lunch, and then back to the Rouleur Classic for the award ceremony. 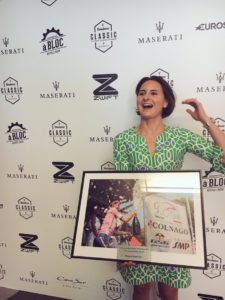 For the award ceremony, Anthony and Laura announced me as the winner to a group of guests assembled at the Rouleur Classic. Anthony presented me with a beautifully framed photo shot by Sean Robinson of Velofocus of me in the pink jersey, celebrating my Giro Rosa win. Voxwomen had put together a brief video about my season, which they played before a 20-minute on-stage interview. I had fun on stage with Laura as she asked interesting, dynamic questions.

While I was spent by Saturday night, I was also buzzing from the excitement of it all and ended up walking 10 miles around the city! The increased exposure of women’s cycling, in part from Voxwomen, has further perpetuated increased interest in the sport. I’m happy to be a part of it and sincerely strive to be a good ambassador from within the women’s peloton.

Sunday morning I flew back home to California. En route I realized that the two day trip had opened my eyes to all the hard work from people who want to grow the sport and are putting in massive efforts behind the scenes. Anthony has invested a lot of resources into helping women in cycling. He doesn’t have to do that, but his passion and excitement fuel his investment – and he’s not the only one. Women’s cycling is full of passionate supporters that put time, energy, and money toward our collective growth. I don’t know that I’ve always appreciated that or appropriately expressed appreciation for it.

Thank you to all the journalists, photographers and videographers that tell the story of our sport and its characters. Thank you to the fans that read, tweet, like, watch and click. Thank you Voxwomen and Rouleur Classic for reminding me that we’re all united in our passion.